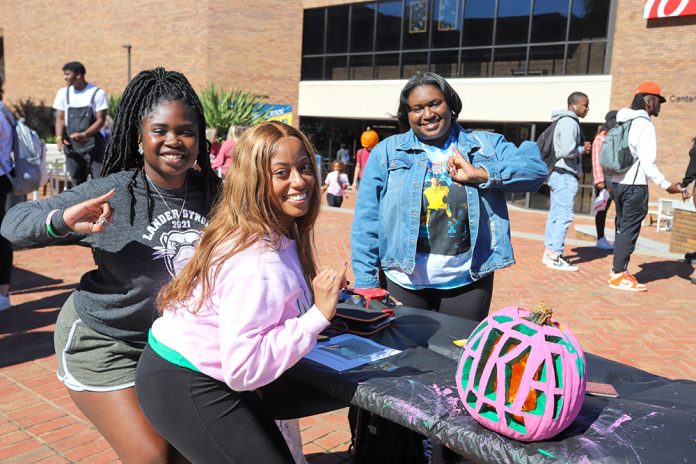 Spirited fun was the hallmark of the 2021”Night of the Living Bearcat” Homecoming Week at Lander University as students, faculty, staff and alumni turned out for a full slate of events.

The week kicked off Monday, Oct. 25, with the annual Medallion Hunt, which gave students the opportunity to search for a hidden medallion on campus or in the Greenwood city limits. Students received clues via Instagram at noon each day and had to return the medallion to the Department of Student Life to receive points.

Student organizations had the chance to compete in a series of other events, too, to earn the Blue Cup or Gold Cup. Points were accrued throughout the week for the different challenges.

“We wanted all groups on campus to have the opportunity to compete in this fun challenge,” said Dr. Demario Levad Watts, Lander’s Director of Student Life and Orientation Programs. “By adding the Blue Cup this year, smaller organizations could compete and win one of the major awards.”

Ileana Collazo, president of the Anime-niacs, said the group found four of the medallions and also competed in other categories, including the Phantom Hour Games, which her team won. “We are trying to show that we are not just a club on campus,” she said of the Anime-niacs. “We are with the campus.”

Lander students selected the Homeless Period Project as their community service program for Homecoming. Lander raised more than $2,800, which will be used to purchase menstrual hygiene products for those in need.

No Homecoming Week is complete without traditional tailgating parties. Lander’s “Nightmare on Montague Street,” held at the Lander Athletic Complex, brought students and alumni together for games, food and conversation before the men’s soccer game featuring the Lander Bearcats and Flagler University Saints. Lander won the game 3 – 1.

Blake Hinton, of Columbia, was the “unofficial” winner of alumni tailgating with a large grill and spread of food served in chafing dishes. “Our fraternity (Kappa Alpha Psi) looks forward to coming to Homecoming and getting together, he said.

Hinton, who earned his bachelor’s degree in marketing management in 2011, said, “We come back and have a good time. It’s great to see all of our friends and reminisce about the good old days.”

Henderson, a local school teacher for more than 30 years, said one of the greatest experiences for her was the opportunity to work with Lander’s education students who came to her classroom over the years for their student teaching experiences. “As the years progressed, I could see how much better prepared they were to be in the classroom than I was at their age, particularly with technology,” she said. “My education at Lander served me well over the years in Ninety Six.”

Crowley, a business administration major and Certified Public Accountant, said she has watched Lander’s growth with pride. “Lander has made great progress over the years and has an impact all over the world. Our graduates go everywhere to work, and they are well-trained for their careers. They make a difference wherever they go.”

Lander’s campus “is big enough and small enough” at the same time, Crowley said, to give students a great education while maintaining a camaraderie among students and faculty. “Lander is in the forefront of training students to become leaders.”

Alpha Kappa Alpha Sorority members said 2021 was the largest year for their organization’s participation in homecoming activities and tailgating. “We crossed the line on campus to turn out and compete,” said Kimberly Hall, the sorority’s vice president.

The organization took first place honors in the Blue Cup division with their carved pumpkin, featuring the sorority’s distinctive pink and green colors, in Lander’s “It’s the Great Pumpkin” contest.

“Many of us have never carved a pumpkin before,” said Sydney Brown. “But we came together and had a great time.”

Their success in the Homecoming Week challenges, coupled with the excitement of participating together, has them ready for next year’s events. “We want to come out even stronger,” said Hall.

Anne Walker ’72, of Sumter, a member of Lander’s Board of Trustees, came to campus with her daughter Melissa Evans ’95 to celebrate Homecoming. “It’s always great to be at Lander. I want us to encourage all of our alumni to come and join us.”

Walker, a scholarship donor and longtime campus leader, said she is proud of her University and is looking forward to the future. “It is so exciting to see the progress that is being made, and we owe this to the incredible staff who are thinking outside the box to make Lander an even better place to be.”

Sym Singh ’07, of Greenwood, was a student at Dutch Fork High School in Columbia when he was recruited to play basketball at Lander. Singh, who earned a bachelor’s degree from Lander and a master’s degree from Liberty University, is Director of Legislative Affairs for S.C. Gov. Henry McMaster.

“When I was here, Lander wasn’t very well known. That is changing,” Singh said. “Today, Lander is becoming a household name.”

The growth of the University, which includes plans for a new $5 million nursing building, marks an exciting time in Lander’s history, he said.

“I love seeing the University grow, and we are building that growth by educating in-state students,” he said. “People see what’s happening, and the word is spreading.”

Homecoming Week culminated with the crowning of a new King and Queen. Chase Maxwell, of Anderson, a senior elementary education major, is the new King. Raylan Garner, of Laurens, a senior interdisciplinary major, is Queen. They were crowned during the soccer game at Van Taylor Stadium.

Watts praised Lander’s students and the Homecoming Committee for their “creativity, determination, and vision” to highlight Lander’s spirit. “They showed how our community comes together and makes Lander home!”