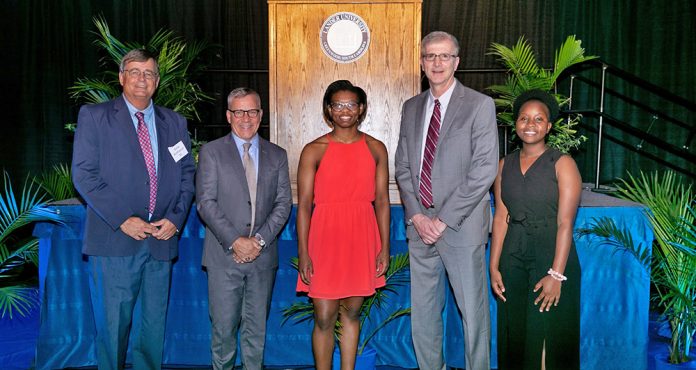 They came from as far away as Zimbabwe and as close by as Greenwood and Ninety Six.

Their stories were as disparate as their paths – a college professor who found a love for math in a family of talented musicians, a student whose mother is working to put her daughter through college and parents whose son died tragically in a drowning accident 20 months ago.

But a simple, powerful bond, known as gratitude, linked them all.

The 37th annual Eleanor Teal Donor Appreciation and Scholarship Celebration at Lander University honored the extraordinary people whose generosity makes college more affordable and accessible for students and the young people whose dreams are being realized through the financial gifts of donors.

Dr. Richard Cosentino, Lander University president, told the scholarship recipients, “Money doesn’t grow on trees. When you graduate, you will more fully realize the support you received from the people you are sitting with. These are generous donors.”

Cosentino’s message was not lost on the University students who are the beneficiaries of those who support higher education. Kaiya Downs-Santa of Greenville, a senior majoring in biology, received a Jerry D. Wilson Scholarship for Excellence in Science.

“The pandemic affected my family’s finances,” she said. “Receiving this scholarship is a help to my mother, who is paying for my education. I appreciate it so much.”

Wilson, who established the scholarship in 1995 with his wife, Sandy, said he worked his way through college and understands the benefit of financial support. “Someone gave me a scholarship to help me go to college,” Wilson said of his education at Ohio University. “I decided that I wanted to do the same one day.”

Chemistry major Collin Pendergrass, a junior from Catawba, said the Wilsons’ scholarship is helping him pursue his education so that he can become a pharmacist. “Scholarships like this one help people know that their dreams can be accomplished.”

Dr. Larry D. Vereen, a Lander biology professor who established the Vereen Scholarship in 1997 for biology majors, said, “I know what it is like to need a scholarship.”

Vereen, who earned his undergraduate and master’s degrees at Clemson University before attending Colorado State University for his doctoral degree, said, “It might sound like a cliché, but the support I got made me want to pay it forward – or pay it back, depending on the direction you choose.”

Most of all, Vereen said the annual dinner gives him the opportunity to meet the scholarship recipients and learn about their experiences. “It means a lot to me personally to talk to them and to receive the ‘thank you’ notes that I’ve gotten over the years.”

Having a scholarship to study abroad was an opportunity that a high school student in Zimbabwe never thought possible. Tinotenda Hope Viga said her family could not afford to send her to college. But a scholarship from the Dr. Douglas and Mrs. Jean Mufuka Scholars Program gave her the opportunity to attend Lander.

One of three student scholarship recipients speaking at the dinner, Viga said, “I never thought that I was going to be able to go to a university, much less a university in the United States. My life has been transformed by these generous donors. It seems like I’m still dreaming. They have given me hope for my future … they are making a change in the world.”

Lady Bearcats basketball player Sarah Crews of North Augusta, who earned her bachelor’s degree in sociology in May and is a graduate student at Lander in business management, promised the donors, “Our gratitude will be the difference we make in the world.”

Crews was a member of the Lady Bearcats team that advanced to the Final Four in the NCAA Division II basketball tournament in March. Her education at Lander has been funded in part by the Lindsey Allison Lee Scholarship and the Luanne Wentzky Scholarship.

She returns to action on the court this year for her final season. After that, she said to the donors, “I will follow your example. I will give back.”

Macy Gault, of Gaffney, a senior history major, joined the dinner by video. Gault is studying in the nation’s capital through the South Carolina Washington Semester Internship Program and is an intern in the office of  U.S. Rep. Tom Rice, who represents the Palmetto State’s 7thCongressional District. A recipient of the W.D. Tinsley Scholarship, Gault told dinner guests that she is a first-generation college student.

“My life at Lander is filled with so many inspiring memories,” she said. “I am incredibly grateful.”

Steve Wohlwend, who earned his degree in accounting in 1981, was recruited to play golf at Lander. The athletic and academic scholarships he received supported his college education at Lander – an education that led to his studies at Mercer University and the Wharton School of Business.

Wohlwend, chair of The Lander Foundation Board of Directors, and his wife, Liz, have created a scholarship endowment.  “Keep this wheel moving forward,” Wohlwent told the scholarship recipients. “We can’t wait to see what you accomplish.”

Retired Lander professor Dr. Bruce White, chair of the University former Department of Mathematics and Computing, attended the dinner with nine of the 10 recipients of the Nat F. White Instrumental Music Scholarship. More than 70 students have received the scholarship since it was established about 27 years ago in honor of White’s father, a founding member of the Oklahoma City Symphony Orchestra.

Although the younger White played the piano and flute, his passion was mathematics. “I was first chair in high school, but I won’t say I was very good. Math was my subject.”

Caroline Wessinger of Pomaria, a freshman recipient of White’s scholarship, hopes to become a high school music teacher. “This will help me pursue my dream. It means the world to me.”

For Cody Fleming, being a member of the Lander men’s wrestling team is particularly heartfelt. He is the first wrestling athlete to receive the Dean Peeple’s Memorial Scholarship, established by R. Douglas “Skeeter” and Jamie Davis Peeples in memory of their son, Dean, who died in a 2020 accident at Lake Greenwood. Athletes on the University’s fishing and wrestling teams – team sports that Dean enjoyed at Greenwood High School – are eligible for the scholarship.

Fleming, of Ninety Six, said being a member of the inaugural scholarship class “is an honor … it makes it all the more special.”

The scholarship also means that “I will have somebody to wrestle for,” Fleming said. “Whenever I’m competing, I’ll be thinking of Dean.”

Curiosity Corner: The Phases of the Moon