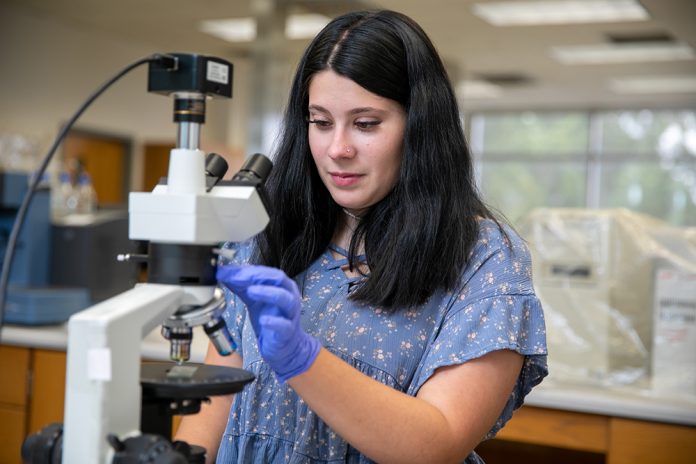 Students at Lander University are always encouraged to take advantage of co-curricular activities by joining a club or student organization. But after just one year of college, sophomore forensic science major Destiny Opotzner, of Myrtle Beach, has already joined six.

Not only is she a member of the Honors College, but Opotzner is also involved in Lander’s chapter of the American Chemical Society, the Microscopy Club, the Car Club, the History Club and Animal Advocates. She also serves as a peer leader for Lander’s LINK program, which gives her the chance to mentor incoming freshmen on their transition from high school to college, as well as provide them with advice and helpful tips for success at Lander.

Studying at Lander has also allowed Opotzner the chance to combine her passion for forensic science with her love of writing. During her freshman year, she chose to add a writing minor to her degree, allowing her to sharpen the professional writing skills she says will be essential to her future success as a forensic scientist.

“Many people do not realize exactly how much writing and research go into forensic science,” said Opotzner, noting that the “CSI Effect” clouds the reality of everyday forensic science. “Due to popular shows like CSI, most people believe that a fingerprint ran through AFIS—an identification system that pulls in their database to connect a potential suspect—takes two minutes to analyze. Or that a hair sample is just one look into a microscope. This is the ‘CSI Effect.’”

When asked what piece of advice she’d give to freshmen students at Lander, she responded in one simple word: “involvement.” While managing six clubs on top of a full course load might seem challenging to some students, Opotzner claims her heavy participation on campus has been key to her success inside the classroom, motivating her to be the “the best student I can be,” she said.

But even with Opotzner’s busy schedule, it looks like a seventh organization may be in her future, as she and another student look to establish Lander’s True Crime Club, which will be open to students of all majors who have an interest in true crime books, movies and television shows.

“I’m going into my sophomore year feeling more at home at Lander than I’ve ever felt,” she said, who added that the close-knit, community atmosphere is much different than the experience she had at a large high school. “Lander has really become a big family to me and I’m so proud of myself and who I’ve become at this University.”