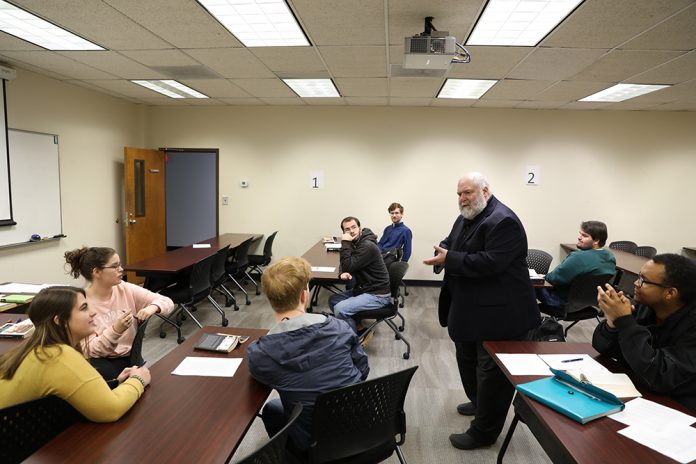 Teaching millennial students about life in the Middle Ages is not without its challenges, according to Lander University Professor of History Dr. Robert Figueira.

“I’m really teaching about an alien culture and society. It’s exotic, it’s strange, it’s different,” said Figueira, Lander’s only medievalist since 1991, when he was hired as chair of the former Division of History and Political Science.

Part of the problem for students lies in the difficulty of finding sources.

“It’s not something you punch up on Wikipedia and it’s there. Maybe you’ll have to go over to the library and get some books down off the shelf. I say, ‘You have a book on King John, look in the index; look at the footnotes; you can build your bibliography by looking at other people’s bibliographies.’”

Hours of close study are sometimes needed to extract meaning from the sources that exist. Figueira said that students don’t always have the patience necessary for that kind of thing.

“And I think this is the curse of the modern information technology revolution. We’re so overloaded with information that we’ve gotten away from the notion that you’ve got to buckle down with less material and try to understand it more thoroughly.”

Not knowing Latin, along with a modern European language or two, can also put students at a disadvantage. When Figueira teaches “Robin Hood: Fact, Fiction and Films,” he has students to read the earliest Robin Hood ballad in English, and they read most of it in the original.

“It’s Middle English turning into modern English. It’s difficult for students at the beginning,” he said.

“Or there’s a bad harvest, and about 10 percent of the people in your village don’t make it through winter —they’re undernourished. Or the flu comes along and takes them out. Or you have a pandemic or a plague. So here you are, 18 years old, and you’re surrounded by death all around you. What do you think about? You think about eternal truths, transcendence, life after death.”

Figueira sees medieval influences in modern-day law, the marriage ceremony, local architecture and practically everywhere else, and he uses these remnants of the past to sell students on the relevance of the subject. Lecturing itself, he tells them, is a pedagogical form that began in the Middle Ages. “I show them that the underpinnings of modern life in many ways are medieval.”

Students respond best, he thinks, when he tells stories about particular individuals who lived in the past. “If I can get up and tell a story about a guy who’s in charge of a small religious house and the way he has to navigate his way through his days and weeks of life, it’s attractive to our students,” he says.

It was a European history professor at Wesleyan University who made the idea of teaching history attractive to him.

“He was a very fluent speaker,” he said. “I watched the work he was doing and said, ‘that looks like fun, I’d like to do that.’”

He decided to focus on medieval history after a conversation with his older brother Thomas, now a professor of classics and ancient history at Rutgers, who said he was going to graduate school to study Greek and Roman history and literature. Choosing the Middle Ages, Figueira said, was “kind of a flippant thing to do. It was a decision made rather quickly.”

After graduating from Wesleyan with a bachelor’s degree in 1973, Figueira enrolled in the medieval studies program at Cornell, earning a master’s degree in 1976 and a doctorate in 1980.

Before arriving at Lander, he taught as a graduate assistant at Cornell and then in numerous other places, including Trinity College/Washington; Emory University; the Institut für Englische Philologie, Bayerische-Julius-Maximilians-Universität in Würzburg, Germany; Southern Methodist University; Wright State University; and Saint Mary’s College of Minnesota.

The topic of Figueira’s dissertation was “The Canon Law of Medieval Papal Legation,” and the contributions to church law of the legates — emissaries of the pope — continue to be an area of interest. Legates were usually learned men from countries other than the one to which they were sent on church business. “At times they assumed very, very crucial roles in representing the pope,” he said.

Figueira identified his strong points as “medieval political history, church history, intellectual history. I’m not a social historian. So although I teach social history, I don’t have that much to do with teaching peasant life, agricultural productivity, things like that.”

Ordinarily, there’s “not a huge groundswell” of interest in the medieval history courses he teaches, but there are exceptions to the rule. Several years ago, the Robin Hood course that he taught had the highest enrollment of any summer class at Lander. He was asked if the success of “Lord of the Rings” has increased the popularity of the Middle Ages as a subject area.

“To a certain extent, yes,” he said, calling it “great literature of the twentieth century,” and the author, J.R.R. Tolkien, “masterful. I’m very, very pro-Tolkien, impressed with Tolkien,” he said.

Life during the Middle Ages has sometimes been portrayed as a kind of golden age, but Figueira isn’t buying it. He said that nostalgia for the Middle Ages is “something you find in literature. It’s something you can understand if you’re very, very rich,” but most people were not.

“I ask my students, ‘Have you ever been camping in winter in wet weather?’ That’s what it was like. You’re happy to have your hut, because your hut is a lot more comfortable than your physical environment otherwise.”

Sanitary conditions during the Middle Ages left something to be desired.

“Probably the stench would kill me; I couldn’t stand the smell. It was dirty,” he said.

Figueira encourages the history majors in his classes to apply for jobs in museums, at historical sites and in similar settings. Getting certified to teach middle school or high school history is another option. A degree in history can also lead to careers in law, journalism, politics, government administration, international relations, and all kinds of research, but he is not supportive of the idea of pursuing a Ph.D. in hopes of teaching medieval history on the college level.

“Doing medieval history isn’t going to work in this country, because it’s not our local history. If we were in Britain, I’d say, ‘do the Middle Ages,’ because there are public history jobs with medieval sites here in Britain, but we’re not in Britain.”

While teaching what he estimates to have been about 8,000 students over the last 40 years, Figueira has somehow also found time to engage in all kinds of scholarly activity, editing 13 issues of “The Proceedings,” the journal published by the South Carolina Historical Association, and “Plenitude of Power: The Doctrines and Exercise of Authority in the Middle Ages: Essays in Memory of Robert Louis Benson.”  He has also written innumerable articles, book chapters, reviews, conference papers, encyclopedia and dictionary entries.

He recently finished the manuscript for a new book, “The View from the Palmetto Grove: Essays in European History from the South Carolina Historical Association.”

For some time, he has been working on an edition of the writings of Richard de Mores, an English canon lawyer who taught law at the University of Bologna, in Italy, during the last decade of the twelfth century. The project involves comparing three parchment manuscripts written in Latin shorthand, which may represent de Mores’s lecture notes. De Mores, he said, “is spoken about highly. He was recognized as an expert in law.”

Figueira has also been busy working on several of his courses: The Crusades, The Italian Renaissance, Medieval Mentalities and Robin Hood, “and, of course, scrambling to learn online and distance-learning technologies.”

He was asked if he ever feels a disconnect between the bygone world he spends so much time in and the world that surrounds him.

“I’d say no; that was then; this is now. I know what happens in between, so I can sort of make the connection.”

Figueira described the “confessional civilization” that existed in Europe during the Middle Ages as a world in which “everything was integrated with everything else,” and he agreed that it “has a certain allure and attraction.” However, he said, “I don’t lament or long for that old world, because that’s not possible.”

Lift Every Voice simulcast at Lander