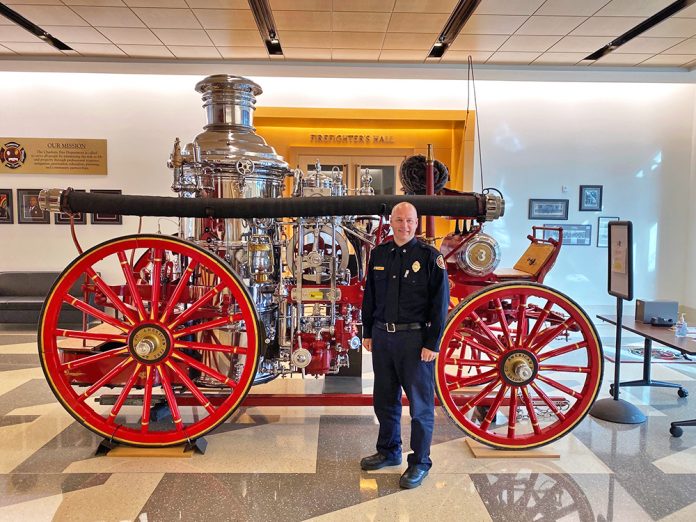 Kevin “Blake” Howell returned to his duties as a fireman with the Charlotte Fire Department in June. There were no headlines, no paparazzi and no fanfare.

But for Howell and many of his colleagues, the shift in assignment came after more than a year away from the first responder duties they loved. Finally, a sense of normalcy was back in the life of the firefighter.

During the COVID-19 pandemic, Howell left the sirens behind to serve as executive officer to the Deputy Incident Commander for the Mecklenburg County Public Health Incident Response and other officials to provide services ranging from deployment staffing, payroll managements, personnel tracking, data analytics and field hospital planning, among many other logistical responsibilities.

Howell’s job duties, which often called for 60- to 80-hour work weeks, weren’t his only focus during the pandemic. The father of two children, Howell was pursuing his M.S. in Emergency Management degree at Lander University, a rigorous academic program that trains people in the science of management during natural and manmade disasters.

“The overall program and content were very appealing and competitive to other programs,” he said. “The final deciding factor to apply was the ability to petition previous work experience and course work for credit hours.”

Apart from the pandemic, Howell’s work also comprised planning for the Republican National Convention, where the final vote for the GOP presidential race took place last August, and responding to community needs during the social justice unrest that marked cities throughout the nation last year, including Charlotte.

“It has been an interesting year,” he said.

One of the most unexpected turns during the pandemic, however, occurred when Howell contracted COVID-19 in December. His oxygen levels dipped dangerously low just sitting on the sofa, and he became hospitalized. “I felt fine,” he said. “I just couldn’t walk across the room.”

He refused to put his work on hold. “Getting COVID was not part of the plan,” he said. “But you can’t not show up for work. So, we held meetings virtually, and we adjusted.”

While all of his story seems overwhelming on paper, Howell took the pandemic’s demands in stride. “The greatest professional challenge was adapting to the rapidly changing operational and planning environment as a result of the pandemic,” he said. “There were some days when the strategic direction would change hourly as new information was discovered and released. The entire team and I learned to be very fluid and flexible enough to pivot planning and documentation at a moment’s notice.”

The flexibility required for emergency management professionals during the pandemic was not unlike that in his job as a firefighter. “I’m comfortable working in similar situations. However, those high-stress situations generally last minutes or hours. The COVID-19 pandemic expanded that time period to days, weeks, and months,” he said.

Howell, 40, grew up in Charlotte after his family moved to the Queen City from Greenville. He graduated from South Mecklenburg High School in 1998 and attended Gardner-Webb University before graduating from the University of North Carolina Charlotte. He worked in the family’s construction business and married his wife Rebecca in 2005. Before being hired by the fire department in 2009, Howell was an EMT and volunteer fireman.

He said Lander’s program in Emergency Management was a perfect fit for his career and has enhanced his skills. “I am more successful in my job because of what I learned through this program,” he said. ‘I became a better writer, which was important for the requirements of my job and the many reports I had to write.”

“The relationships that were established during this experience will last for generations,” he said. “The coordination and collaboration that occurred among so many people from different professional backgrounds was textbook.”

No doubt that work was invaluable for his master’s degree dissertation, titled “Charlotte-Mecklenburg Incident Management Team’s Contributions to Emergency Management.”

As he looks back on the challenges of the pandemic, Howell said no one could have predicted the path that the pandemic took and the uncertainty that dominated many of its days. However, he is proud of the job done by those in his community.

“I think Mecklenburg County has done a great job. They got it right,” he said.

The Place to Be: Lander President cites impressive growth in State of the University address