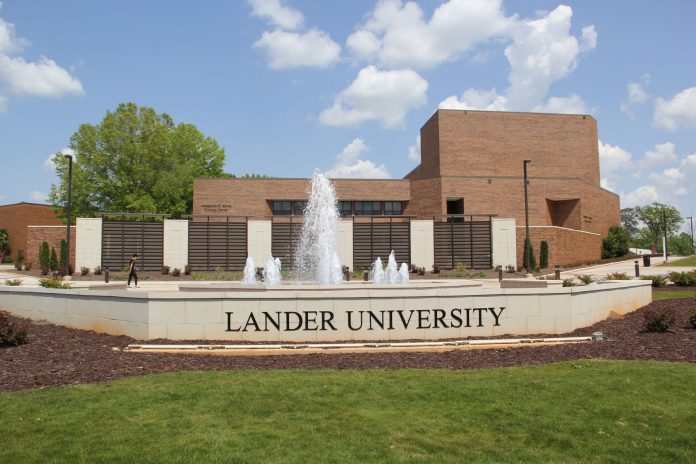 When the South Carolina General Assembly finalized its budget for the 2021-22 fiscal year, it included a record amount of new funding for Lander University.

The state legislature has appropriated $17,710,799 in new funding for the University this year, which includes dollars that will be used to construct a brand new, state-of-the-art nursing building on Lander’s campus in Greenwood.

“Lander University has been a leader in nursing education for more than half a century, and as part of our strategic plan, we want to continually grow and enhance this signature program,” said Lander President Richard Cosentino. “For the past five years, we have been working closely with the General Assembly to make our plans for a new nursing building a reality. With the legislature’s generous support, we will be able to triple enrollment in the upper level of our nursing program, which means there will be more Lander nursing graduates ready and prepared to meet the challenges of 21st century health care delivery.”

Nursing is Lander’s largest academic major, accounting for nearly a quarter of the school’s total student body. Providing those students with an environment that allows for dynamic and innovative learning opportunities is important, said Dr. Todd Gambill, Lander vice president for Enrollment and Access Management. This summer, the University began making significant headway in that effort with the creation of a new, expansive simulation laboratory housed at Legion Hall. Designed with input from Lander’s nursing faculty, other simulation lab personnel and Self Regional Healthcare, the sim lab will feature an array of the most current clinical equipment and technologies. It is expected to be complete and ready for use by the end of the year.

“Along with the simulation laboratory already under construction, the new, future nursing building will provide even more opportunities for our students, as well as allow for continued growth,” Gambill said. “We are thrilled that our facilities will be among the best in the state as we continue to offer a world-class experience to increasingly larger cohorts of nursing students. Our graduates are filling a crucial need in the region and beyond.”

The legislature’s funding for a new nursing building comes at a time when the state’s need for nurses in the health care industry has been heightened by the pressures of the COVID-19 pandemic. It has been reported that South Carolina is estimated to lack around 10,000 nurses needed to meet the growth of the state, a trend that may lead to one of the most severe nursing shortages in the country within the next decade.

These predictions were corroborated by Dr. Holisa Wharton, dean of Lander’s William Preston Turner School of Nursing, who along with the rest of Lander’s highly-credentialed nursing faculty is working to buck that trend. Wharton shared data from a 2017 study by the U.S. Department of Health and Human Services’ Health Resources and Services Administration, showing that South Carolina ranks fourth in the nation for states predicted to have a nursing shortage by 2030. However, Wharton said the State of South Carolina’s investment in Lander’s School of Nursing will help address the shortage.

“The School of Nursing is extremely grateful for our legislators’ support to fund this new building and further expand our nursing education program,” said Wharton. She noted that the additional classroom and lab space will allow the School of Nursing to triple the number of students permitted to progress to the upper-level of the nursing major. “Thanks to the General Assembly, the School of Nursing will join the efforts of our state academic partners by increasing the progression of nursing majors to meet the call for highly demanded, baccalaureate-prepared registered nurses.”

According to Senator Billy Garrett, it was addressing this nursing shortage that led South Carolina legislators to their decision to fund a new nursing building at Lander. “This is a big win for Lander University, for Greenwood, and for the State of South Carolina,” Garrett said, who noted this was the first time in approximately 25 years that the General Assembly has voted to fund a new building on Lander’s campus. “With such a high demand for nurses in our community, and in our state, this additional clinical space on campus will allow Lander to produce more of the highly qualified nurses for which the University is known. Not only is this good for Lander, but it’s good for our local economy in Greenwood, and for our entire state, as it helps us meet the most critical need within the health care industry.”

Senator Mike Gambrell agreed with Garrett, calling COVID-19 the “kick in the tail” lawmakers needed to begin taking steps towards rapidly addressing the state’s nursing shortage. Gambrell stressed that a new nursing building was an easy choice for lawmakers to make. “What many people may not realize is that 78% of the graduates from Lander stay in South Carolina,” said Gambrell, recognizing that an increase in nursing graduates from Lander would mean an increase in qualified nurses in South Carolina. “Lander was the perfect spot for it.”

That was also a big selling point for State Representative Stewart Jones. As he toured medical practices and facilities in the aftermath of COVID-19, Jones said he was able to see firsthand the stress the health care industry was under. “I want us to hire more nurses here in South Carolina,” he said, noting that nurses were being brought in from neighboring states to assist during months when S.C. saw significant spikes in cases. “I felt like this was a very well-warranted project that will help us locally, and help inspire some of our local students to enter the nursing field.”

In Columbia, Lander is well-known by state lawmakers for its rigorous and enriching nursing program, according to Representative Anne Parks. “Lander University’s School of Nursing is a cornerstone of the Greenwood community and the State of South Carolina,” said Parks. “That made investing in this program an easy choice for the General Assembly. Growth in Lander’s nursing program will benefit our local communities, as well as our state.”

Representative Craig Gagnon joined Parks in her remarks, adding his own personal connection to the school. “I know of the quality of the nursing program firsthand, because my daughter is a proud graduate of Lander’s School of Nursing,” he said. “Nurses are the backbone of the health care industry, and Lander does a phenomenal job preparing nurses for the workforce.”

With many of Lander’s nursing graduates choosing to stay local after completing their degree program, Greenwood-area leaders remarked on the impact an influx in enrollment of nursing students will have on the local health care industry, as well as the positive economic impact of adding these additional workers to the community. “Greenwood is blessed to have such an innovative institution of higher learning,” said Greenwood Mayor Brandon Smith. “This investment in the nursing program will benefit Greenwood’s medical community and economy for many years to come.”

“This is an exciting moment for Lander University, and for Greenwood County,” said Jim Medford, chair of the Workforce Development Task Force for the Greenwood County Chamber of Commerce. “What sets Greenwood County apart from other communities in our state is how our stakeholders consistently work together to meet the needs of our economy, and move our community forward in the same, positive direction. Lander University’s commitment to training qualified health care professionals is an important piece of that puzzle.”

Roland Snelling, director of North America Manufacturing for VELUX Greenwood and current board chair for the Greenwood County Chamber of Commerce, agreed with Medford’s comments, noting that Lander provides local businesses, like VELUX, with exceptional candidates that meet workforce needs. “The announcement today only enhances the already wonderful, highly regarded learning experience for the young women and men choosing Lander University for their nursing education,” said Snelling. “What a great enhancement for Lander and Greenwood.”

“It’s vital to the health and wellbeing of our community that we have a pipeline of well-trained and high-quality nursing talent right here in the Lakelands,” Pfeiffer added, “and we are so grateful for partners like Lander University working hard to see that this need is met.”

State Representative John McCravy joined Pfeiffer in his remarks, emphasizing the strong reputation Lander’s nursing school has in the Greenwood community and throughout the state. “I am ecstatic that our General Assembly saw fit to support Lander in the way we were able to this year,” said McCravy. “The nursing program is top-notch and is just one of the many excellent programs the school offers. This new nursing building will greatly benefit Greenwood and our entire state with quality jobs in the fast-growing field of health care. There is no doubt that Dr. Cosentino’s visionary leadership has moved Lander University’s status to one of the most-respected and impactful schools in the state.”

Dr. Cosentino thanked legislators for their efforts to secure the funding for the University. “We are extremely grateful to our state’s lawmakers for entrusting Lander University to prepare the next generation of qualified nurses for our state,” he said. “This investment in Lander’s nursing program is an investment in South Carolina and our citizens.”

Lift Every Voice simulcast at Lander