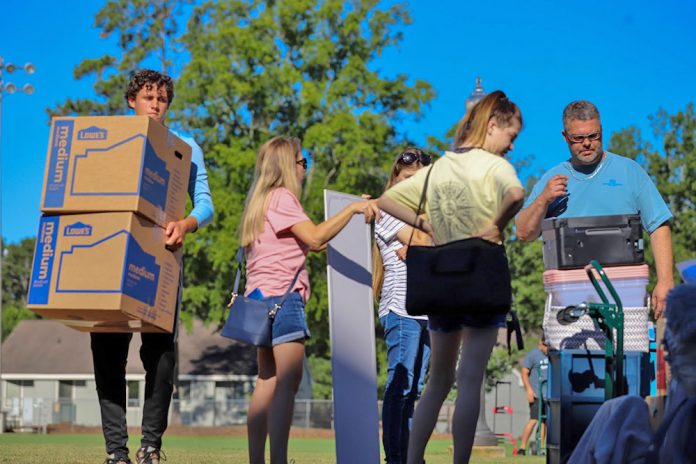 Moving Jade Kinseth into Lander University’s New Hall was no small feat. The 18-year-old freshman from Powdersville arrived and quickly filled three luggage carts and two elevators with her belongings.

“You get the award for bringing the most,” a Move-In volunteer said with a laugh.

Kinseth laughed, too. “I didn’t think that I had this much stuff. My parents will have to take some of it home.”

For a second year, Move-In Day at Lander featured a centralized check-in system across five days. Students and families arrived at the University’s fountain area, remained in their cars and received keys and welcome packets through car windows. The process, implemented in the wake of COVID-19, brought an end to the exciting, but sometimes frenetic one-day, check-in for freshmen, which had been the norm.

“The pandemic forced changes last year,” said Zach Helms, director of housing and residence life, “and those changes were good. I don’t think that we could go back to the former system. The five days are demanding on staff time, but the process is so much easier. Students, parents and staff don’t have the rushed feeling that was part of our previous Move-In days. It’s a positive experience for everyone.”

The University moved in 1,800 students across all class levels, which exceeded last year’s number by about 100, said Helms, noting that Lander made only a few small tweaks from 2020.

“The feedback again has been great,” he said.

Approximately 100 faculty and staff volunteered to assist during Move-In. “They are an important part of this experience,” Helms said, “and we appreciate their support. I know the families do, too.”

While waiting in line, freshman Ashton Neal, 18, from Lancaster said her favorite possession from home was her pillow. “I couldn’t leave it,” said Neil, who is pursuing a chemistry major with a minor in forensic science. “I’m looking forward to my classes and making new friends.”

Catherine Arbogast, 19, of Barnwell, was among Lander’s staff welcoming students to campus. A recipient of Lander’s 2020-21 New Student Leader Award, Arobogast volunteered to help students as they drove up to the tents and entered campus.

“I was a little nervous last year, but Move-In was easy,” said Arbogast, a sophomore majoring in biology with an emphasis in genetics.

Arbogast said she is happy to back at Lander, where her focus will be on her classes. “I am going to be studying so much this semester. I keep telling my friends that if they want to hang out with me they’ll have to come to the library.”

Freshman Michael Burrage, 18, and his parents left home in Georgetown at 4:30 a.m. for their trip to Greenwood. The academic reputation of Lander’s nursing program was key to his decision to attend the University. “I’m looking forward to school and getting my degree in four years. This is the beginning.”

His passion for helping people is the reason for his decision to study nursing. “I’ve known what I wanted to do for a long time.”

Burrage, who was on the cross country, baseball and basketball teams at Carvers Bay High School, said he is eager to be involved in Lander’s intramural sports. But was he ready to be away from his parents? Burrage gave an immediate two thumbs up as a response, which brought a laugh from his mother.

Technology helped freshmen Kasey Richardson, 17, of Columbia, and Abby McLeod, 18, of Charleston, find a match as roommates. They became friends through the Lander Class of 2025 account on Instagram and met each other at an orientation session. They set up their room in Chipley Hall on the first day of Move-In.

Richardson, a chemistry major with an emphasis on forensic science, had an 8 a.m. reservation for Move-In. “The key pickup and getting into Chipley were easier than I imagined.”

McLeod, who is majoring in exercise science, said, “I love the campus and how much at home I feel. I like the curriculum, and the classes offered in my major. Lander is a good fit for me.”

As students move in and get settled, Lander’s residence hall advisors (RAs) are on call to help roommates make the transition between home and college. Mia Crankfield, 20, an RA at New Hall, said, “I want them to be as comfortable as they can be. It’s a big step into adulthood.”

Most freshmen, she said, are looking forward to new experiences and making new friends “They’re starting a new phase in their lives. We’re here to answer their questions and help them.”

Watching as students carried boxes and bags through the New Hall lobby, Crankfield said, “They are both excited and nervous, but we know many of them are thinking, ‘yay, freedom’ as their parents leave.”

The transition to college, however, isn’t as easy for parents.

Moving him in, however, was going to be easy. “He’s a guy. He didn’t bring much,” Elizabeth Madden said.

But the business management major from Irmo did bring his guitar to college, along with all of the other essentials. He’s played music with his three older brothers since learning to play drums at age 6, and said he hopes his studies will help him become an entrepreneur. “I’d like to run my own business, maybe a restaurant or a recording studio.”

Despite the difficulty of leaving her son on campus, Elizabeth Madden said the move has an upside. “Lander has a family atmosphere … and I like that he’s not too far from home.”

While making a final trip to the car, Greg Kinseth said leaving his daughter Jade, an exercise science major, was tough. “I’m struggling. I’m trying to be really excited for her, and trying not to let it bother me too much.”

Jade was struggling a bit, too. Her dogs – a pitbull, a Chihuahua and a Maltese – weren’t part of the Move-In experience. “It was so sad saying goodbye this morning,” she said, reminding her mother, Dawn Kinseth, to give them extra hugs.

As she prepared to tackle the challenge of unpacking her daughter’s belongings, Dawn Kinseth said, “I’m OK that she’s leaving home. This is life. You move on. I know Jade’s thinking, ‘Mama doesn’t have a heart.’ But this is an important step for her, and I’m excited for her to be at Lander.”