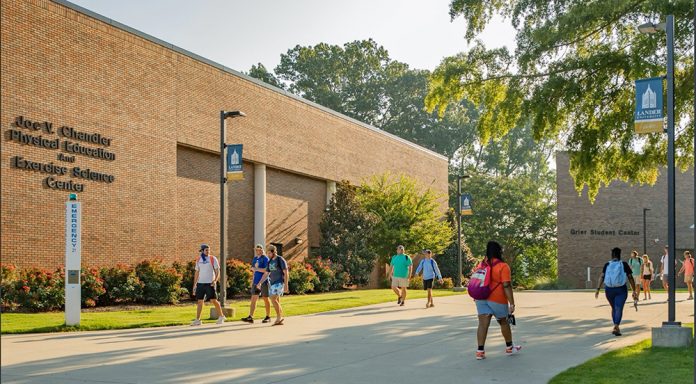 The Fall 2021 semester at Lander University has launched with yet another year of record-breaking enrollment and residence halls filled to capacity.

Classes began Monday, Aug. 23, and as the first week of the semester wrapped up, Lander’s total enrollment was at 3,839 students – an all-time high for the University, and a 9.3 percent increase over Fall 2020, when Lander had 3,511 students.

Included in the impressive enrollment figure are several other significant milestones:

Over the last six years, Lander’s enrollment has grown an impressive 42.1 percent, with an increase of 1,138 students since the fall of 2015.

“Lander is quickly closing in on a total enrollment of 4,000 students. This represents a period of tremendous growth at a time when national figures indicate a decline in college enrollment, especially among undergraduate students,” said Dr. Richard Cosentino, Lander President.

And, while the pandemic has had devastating impacts on many colleges and universities, Lander has remained a highly sought-after choice for students and their families. “I am incredibly proud of the hard work our faculty and staff have done to support and encourage our students through the challenges of COVID-19. Their dedicated efforts have had a direct impact on our students’ success, as well as our ability to continue to grow and thrive as an institution,” Cosentino said.

Ninety-one percent of Lander’s students are from South Carolina, which is “a clear indication that our mission to educate the young people of the Palmetto State is being realized,” Cosentino added.

The large number of in-state students dovetails with the S.C. Commission on Higher Education’s objective to increase postsecondary education and equity for the state’s high school students. A recent CHE report stated that “today’s knowledge-based society and economy demand citizens with education beyond high school.”

The University’s success can be attributed largely to Cosentino’s focus “to drive enrollment and lock tuition rates to keep the Lander experience accessible and affordable for South Carolina families,” said Dr. Todd Gambill, Vice President for Enrollment and Access Management.

Lander’s tuition has been frozen for six consecutive years. “New academic programs, including online and graduate degree programs, as well as an increase in the number of athletic teams, more scholarship dollars, and improved facilities all contribute to the enrollment growth that we have seen since Fall 2015,” Gambill said.

Cosentino said the University’s recent $17.7 million in new funding from the S.C. General Assembly underscores Lander’s commitment to developing a campus that has state-of-the-art facilities to support current and future academic programs and student life.

“Lander is undergoing exciting changes and expansion as we prepare to celebrate our 150th anniversary in 2022,” said Cosentino. “The commitment by our faculty, staff, donors and community supporters to Lander’s mission is crucial for our success, and the Board of Trustees and I could not be more grateful.”