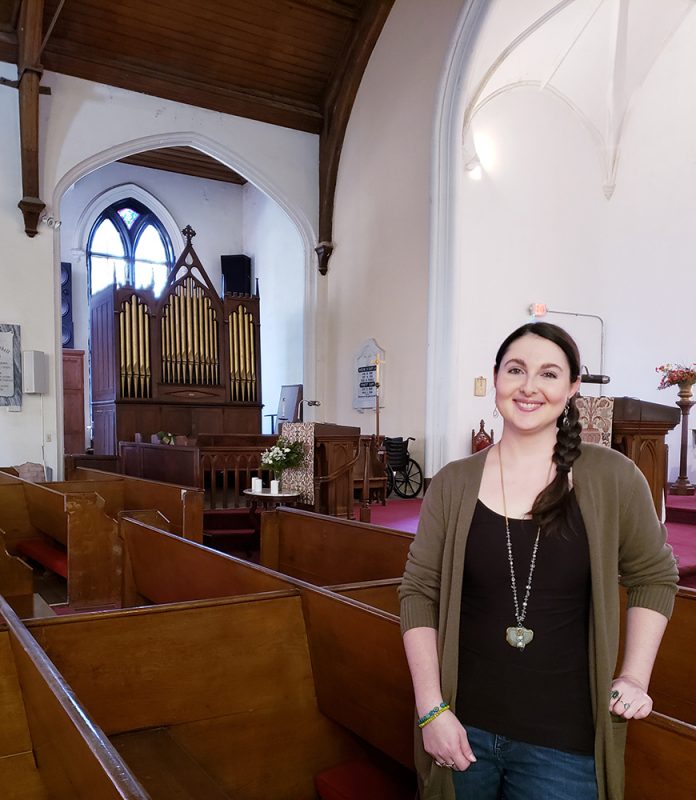 Her obsession for history is so strong that you’re likely to find Anna Lagrone crawling under an old church in need of preservation, promoting historic Abbeville, S.C., on social media, or studying the tragic life of former English Queen Anne Boleyn.

“I guess you’d say I’m a nerd,” Lagrone said with a laugh that lets you know that the label doesn’t faze her in the least.

She loves the beauty of language and words, too – a passion that she puts to good use in her historic preservation efforts. During a recent tour of Trinity Episcopal Church in Abbeville, Lagrone talked about the magnificent stained glass windows and complicated history of the church, where the bricks were made by enslaved people during the mid-1800s.

She balances her work in higher education with service as vice chair of the Historic Properties Protection Commission of Abbeville, established in 1758 by French Huguenot settlers. Appointed to the post by Abbeville City Council, her work involves helping preserve the historic nature of the charming town while advising businesses and city administrators on proposals for existing structures, landscapes and new construction. The commission also provides information on preservation, restoration and local history to the public.

“It is gratifying to be involved in my community and to help Abbeville in any way that I can,” she said. “The history here runs deep, and it is important that we preserve it for future generations.”

Before joining Lander, Lagrone was employed by Preservation South Carolina, which is collaborating with Friends of Trinity Abbeville to raise funds for the restoration of the church. The preservation efforts, to be completed in five phases, include restoring the exterior of the church, repairing all of the damaged plaster of the interior and restoring the stained glass (some of which is by William Gibson, named “the father of stained glass painting in America). Plans call for the restoration of the “tracker” pump organ by John Baker of Charleston and stabilizing the 125-foot steeple, whose deteriorating foundation led to fears of the structure’s collapse.

An iconic symbol of Abbeville, Trinity was formed in 1842, and the cornerstone of the present church was laid in 1859. Its neo-classic design and Gothic look are often the first thing people notice when they visit. Lagrone remembers seeing it as a child and being struck by what looked like “a pink castle” right in the heart of the downtown area.

“Over the years, the church has been the worship site for state and national leaders, families praying for their loved ones in world wars and other conflicts, and modern families whose ancestors were among the first members of the town,” Lagrone said. “Trinity is at the heart of our town’s history.”

However, the danger posed by the steeple halted services and other activities while funding for restoration efforts was being raised. This past fall, with enough monies in place and the steeple secured temporarily, Lagrone directed a wedding there. Trinity is still a work in progress, but it is open again for services and the public.

While working as a coordinator for the Sacred Spaces Program of Preservation South Carolina, Lagrone developed plans for marketing Trinity so that it could be self-sustaining financially and serve as a center for future community events. “I developed a business model that includes both educational and cultural events to bring the community together and also produce income to help preserve and restore not just this ‘sacred space,’ but others across South Carolina,” she said.

Lagrone’s lesson plans for school groups adhere to South Carolina’s social studies standards for education and also relate Trinity to state and national history.  “We were ready to begin tours and programs for schools and other organizations when COVID hit. Those plans stalled,” she said. “However, Trinity has plans in place for field trips, concerts and other events. We want this historic property to be enjoyed by people of all ages in the years to come.”

Trinity’s future is brighter. Permanent repairs to the steeple have begun. “Phase II is officially under way, and the steeple of Trinity Church is in its final position, resting on a new foundation,” she said. “I’m confident that it will remain for another 200 years, a beautiful symbol of architecture, ingenuity, and hope for our community.”

During her tenure at Lander, Lagrone received numerous honors, including the Margaret Bryant Award, which recognizes a senior majoring in a humanities discipline, and the Barbara Jackson Award, honoring a senior history major who best demonstrates scholarly excellence in his or her history thesis. She also earned the Dessie Dean Pitts Award, which recognizes the student who writes the best nonfiction essay published in New Voices, Lander’s essay journal. She was a member of Phi Alpha Theta, a history honor society, and Sigma Tau Delta, an English honor society.

Lagrone’s journey at Lander began as an English major because of her love for literature and writing. However, “one major was simply not enough to satisfy my voracious appetite! History had always been a passion of mine, and I believe that majors in History and English complement each other perfectly — you have to be able to write and communicate effectively about your historical research, after all,” she said.

Her passion for history formed in childhood when she realized that history was more than dates or interesting stories. “It was real people whose actions impacted and shaped the world today. I remember being in elementary school and learning about the Tudors and being very taken by Henry VIII’s wives,” she said. “My natural inclination was to get my mom to take me to the library, where I’m sure I emerged staggering from the weight of all the books I’d found.”

As a result, the homeschooled student said history always felt very real and very human to her. “My love for history only strengthened as I grew older and developed precision during my years at Lander with the guidance and encouragement of my professors,” Lagrone said.

Being outdoors or working with animals makes her as happy as history, too, she said.

“I keep telling myself, one day I’ll have my Ph.D., my own farm, and a few successful books published — another beautiful marriage of History and English,” Lagrone said. “I love both disciplines and want to use them both!

Beware of Scams in the Wake of Hurricane Matthew