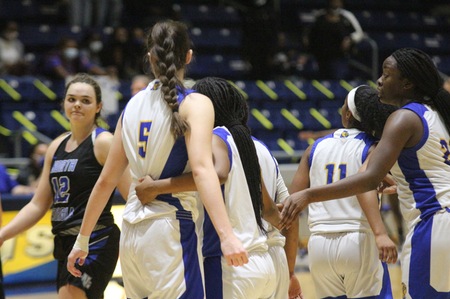 GREENWOOD – The No. 6-ranked Lander women’s basketball team got a game-tying layup from Makaila Cange with four seconds left to force overtime and went on to beat No. 12 North Georgia 69-63 behind Miriam Recarte‘s fourth consecutive double-double Saturday afternoon at Horne Arena.

The Bearcats stayed unbeaten, improving to 7-0 overall and 5-0 in the Peach Belt Conference.

Saturday marked the first regular-season meeting between two top-15 teams for Lander since a Feb. 23, 2011, game between the No. 2 Bearcats and No. 14 USC Aiken.

Zamiya Passmore scored 16 of her 18 points after halftime, including eight in overtime. She paced the Bearcats with seven assists.

Amiaya Melvins had a big all-around game for Lander with 13 points, eight rebounds, four assists and three steals including forcing a big turnover in overtime as well as drawing a pair of offensive fouls in the extra session. Melvins scored six points in the fourth quarter when the Bearcats erased a five-point deficit.

Abbie Franklin paced North Georgia with 17 points while Caroline Martin added 12 points. Julianne Sutton contributed a double-double for the Nighthawks with 10 points and a game-high 17 rebounds, including 15 on the defensive end. Kara Groover led North Georgia with six assists.

The Nighthawks scored nine unanswered points to take an early 9-4 advantage. Lander regained the lead when Melvins rebounded her own miss, laid it in, drew the foul and completed the three-point play for a 14-13 advantage with just over two minutes left in the first.

Recarte hit a long 3-pointer from the top of the key with four seconds to go, giving the Bearcats a 20-18 lead going into the second period. Recarte had 11 points in the opening quarter.

North Georgia opened the second period with six unanswered points, taking a 24-20 lead on Abby Hubert’s basket at the 7:13 mark. Natalia Crooke‘s 3 from the left corner pulled Lander within 28-27 and Sarah Crews made a long jumper to tie it at 29-all with 2:15 left.

But Martin made a pair of driving layups as the Nighthawks closed the half on a 5-0 run for a 34-29 lead at the break. It was Lander’s first halftime deficit of the season.

Passmore’s driving floater in the lane tied it at 34 with 7:14 left in the third. Franklin’s 3 from the right side followed by Chloe Savage’s layup put North Georgia up 42-36 inside the three-minute mark.

A steal and driving layup by Melvins pulled Lander within 42-40 with 1:46 to go. The Nighthawks regained their halftime lead of five points, taking a 47-42 advantage going into the fourth.

But the Bearcats responded, opening the final period with nine consecutive points to take a 51-47 lead with 6:42 left. Passmore opened the run with a jumper, Crews made a game-tying 3, Melvins scored off a feed from Passmore, and Crews nailed a baseline jumper.

Franklin’s transition 3 cut the Nighthawk deficit to 55-53 with 1:34 to go. Cange’s free throw pushed Lander’s lead to three, but Franklin’s layup cut it to 56-55 with 50 seconds left.

The remaining 50 seconds were frantic. The Bearcats missed a quick shot on their end, giving North Georgia a chance to take the lead. Martin missed a trey from the right side with 16 seconds left and Lander rebounded. But the Bearcats turned the ball back over when Groover intercepted a pass. Groover passed to a fast-breaking Martin for a driving layup and three-point play, putting the Nighthawks up 58-56 with seven seconds to go.

It was Lander’s turn to rally. Cange took an inbounds pass from Recarte at the free-throw line and aggressively drove to the basket for a game-tying layup with four seconds left to make it 58-all.

North Georgia had a chance to make a game-winner, Melvins intercepted the inbounds pass, lost the ball again on a traveling call, and then Groover’s desperation 3-point attempt off an inbounds pass fell short at the buzzer sending the game into overtime.

Passmore’s free throws and a Melvins driving basket after she had drawn an offensive foul gave the Bearcats an early four-point lead in overtime. Passmore made a driving basket in the lane giving Lander a 64-61 lead with 1:43 left.

Sutton’s layup closed the Nighthawk deficit back to one and North Georgia would grab a defensive rebound with a chance to take the lead. But Recarte stole an entry pass and then Passmore would hit two free throws for a 66-63 Bearcat lead with 48 seconds left.

Melvins forced a Nighthawks turnover and then Passmore added two more free throws, making it 68-63 with 28 seconds to go. Recarte added a defensive rebound and free throw for a 69-63 final.

Jaguar Invitational rescheduled for Sept. 22 due to Hurricane Florence