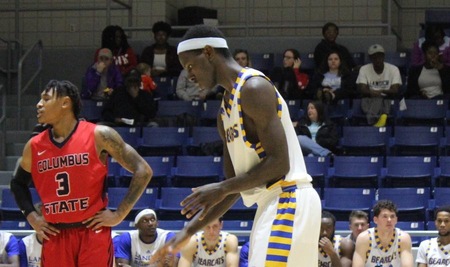 Marquel Wiggins paced Lander with 25 points and 10 rebounds. He made 11 of 13 free throws.

Elijah Alston also had a double-double for the Bearcats with 12 points and 10 boards. Rahu Purdie added 16 points for Lander while DeShundre Rucker had 10 points and two blocked shots.

Columbus State started fast, taking a 17-5 lead just four minutes into the game on a Givens three-pointer. Alston hit a pair of threes and Codrin Cobzaru scored twice during a 15-4 run that pulled Lander within 21-20 with 11:20 left in the first half.

The Cougars opened the second half on a 16-4 run, taking a 66-38 advantage on Taylor’s basket with 15 minutes to go. Taylor’s bucket ended a stretch when Columbus State outscored the Bearcats 45-18 since the 11-minute mark of the first half.

Lander cut into the deficit with a 20-6 run, pulling within 74-58 at the eight-minute mark. Wiggins scored 10 of those 20 Bearcat points.

Horton’s layup pushed the Cougars lead back to 20, 80-60, with six minutes to go. Lander outscored the visitors 18-8 the rest of the way.

Wiggins drove lane and finished with a dunk, pulling the Bearcats within 86-73 with 45 seconds left. Purdie’s fourth three-pointer of the game cut the final margin to 10 points.

Hugo Delhommelle selected as PBC Player of the Week