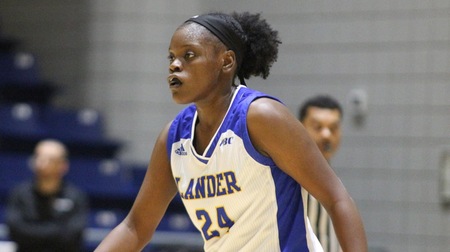 The Lander women’s basketball team got a double-double from Tabitha Dailey and 18 points from Mylea McKenith as the Bearcats pulled away from rival Erskine for a 91-73 win on Wednesday afternooon in front of 740 fans at Finis Horne Arena.

“We got off to a slow start,” said head coach Kevin Pederson, “but had a good second quarter and went up by 18 points. The focus coming into this game was that we had to rebound the ball better. We did a better job, it was good to see Tabitha hitting the boards hard. I didn’t feel like we were shooting the ball well early, but we ended up shooting the ball pretty well. We were solid, but this team can still be a lot better than what we’re showing.”

Dailey netted a career-high 22 points and gabbed a game-high 10 rebounds, while going a perfect 6-for-6 from the free-throw line. McKenith connected on three three-pointers en route to her 18-point performance. Jessica Harris finished with 12 points, nine assists and five steals, while Symone Starks added 10 points for the Bearcats.

After a first quarter that featured eight lead changes, Lander opened the second quarter with a 15-5 run to build a 10-point advantage that stretched to 18 by halftime, as the Bearcats took a 53-35 lead into the locker room.

Erskine would not pull closer than 12 points in the second half as 12 different Bearcats saw action, with nine scoring on the day.