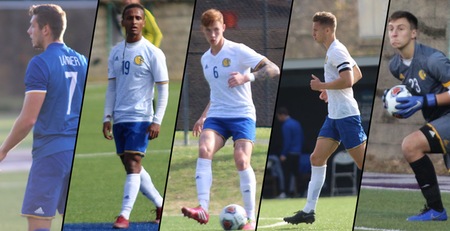 Five members of the Lander men’s soccer team were named to the United Soccer Coaches All-Southeast Region teams on Monday. Three players were named to the first team, with one player landing on the second team and one on the third team. The Bearcats were the only team in the region to have five players honored.

Skelton was a first-team All-Peach Belt Conference honoree and a first-team D2CCA All-Southeast Region selection. He led the team with eight goals and 17 points while starting every match for the Bearcats. In his career, the captain started 74 of 79 matches for Lander, including 55 consecutive starts over his final two and a half seasons in Greenwood. Skelton anchored a defense that allowed just nine goals in 21 matches. In his senior season, Skelton set a PBC record by becoming the first field player in conference history to win five weekly honors.

Brock earned a spot on the All-PBC second team, leading the Bearcats with seven assists on the season. Brock ended his Lander career with 21 assists and recorded points in five of his final seven career matches with the Bearcats.

Chretien was a second-team All-PBC honoree and a second-team D2CCA All-Southeast Region performer, scoring two goals and recording five assists. The sophomore has racked up 21 points in his first two seasons at Lander.

Ferguson earned a spot on the All-PBC second team, leading a Bearcat defense that surrendered just 0.43 goals per match. The sophomore added two goals and two assists in 19 starts, the most of any Bearcat underclassmen during the 2018 campaign.

Lander completed the season with a 16-2-3 record and the Southeast Region championship for the the third time in program history. The Bearcats made their deepest NCAA Tournament run since 2005 and won the most matches for the program in a single season since 2006.

No. 10 Lander faces non-conference foe Queens on the road Wednesday

No. 17 Lander tied for 10th at Cougar Invitational