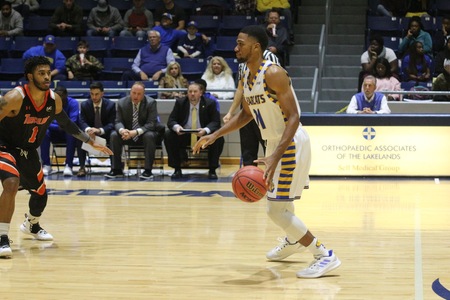 Bearcats done in by second-half run in road loss to Tusculum:

The Lander men’s basketball team could not slow down Tusculum in the second half as the Bearcats fell to the Pioneers, 84-61, on Saturday afternoon.

Marquel Wiggins led the Bearcats with 17 points, while Elijah Alston scored nine points and grabbed a team-high eight rebounds. Dillon Smith came off the bench to score a game-high 20 points for the Pioneers, knocking down five of his eight three-point attempts, including three on three consecutive Tusculum possessions in the second half.

Tusculum held a 53-29 advantage on the glass while going 10-of-29 from beyond the arc. Lander was 1-of-7 from long range on the afternoon. The two teams combined to attempt 65 free throw, with Tusculum converting 24-of-32 and the Bearcats making 22-of-33 attempts.