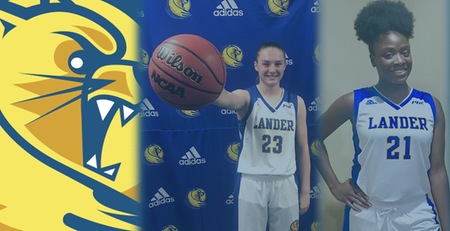 Cange, a 5-11 post player, averaged 11 points and 12 rebounds per game as a junior. She was named the team’s Offensive and Defensive MVP in each of her first three seasons at New Manchester and has been accepted to Lander’s Honors College.

“Mikaila has been a vital part of our program since she was a freshman,” said New Manchester head coach Vincent Parks. “She has been a varsity player from day one and is currently one of our seior captains. Her versatility on the court and her leadership has been huge in our program.”

“With the graduation of Breshay Johnson, our top priority with this recruiting class has been to address the loss of a play-making post player,” said Pederson, “which is an integral part of our system. Makaila brings a unique skill set to the table as a post with a high basketball IQ that can make plays all over the court. She comes from a very successful Douglasville Lady Tiger AAU program where she had a lot of success in a very similar role. We look forward to giving Makaila the opportunity to make an immediate impact on this program and seeing what she does with that opportunity.”

Revelle, a 5-7 shooting guard, is a three-time academic All-Conference selection who averaged nine points and three rebounds per game during her junior campaign.

“Cierra has been a key part of building this program from scratch, with us being a brand new school,” said Apex Friendship head coach Scott Campbell. “Her work ethic and effort has motivated others to follow suit. She plays hard all the time and has put a lot of time into becoming the player that she is. We are thrilled for her to have the chance to continue to play the game that she loves at Lander University.”

“With Ariana Sanders graduating in May, we made it a high priority to go after a prospect with the ability to come in and compete immediately for minutes at the two-guard position,” Pederson said. “Cierra is a tough kid that can defend well and she can really shoot the basketball. We are very excited to see what a smart player with her skill set can do in our system.”