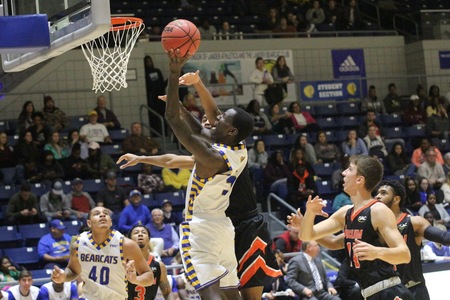 The Lander men’s basketball team fell victim to a 23-8 run over the final 5:40 on Tuesday night, falling 85-82 to Livingstone in a non-conference contest.

Neither team led by more than five in the first half and the Bearcats held a slim 56-54 lead with 10:54 remaining before embarking on an 18-8 spurt, highlighted by eight points from Wiggins, to build a 12-point advantage.

Facing its largest deficit of the night, Livingstone turned to Roger Ray, who scored 19 of his 22 points in the final 5:04 to bring the Blue Bears all the way back.

Lander travels to Tusculum on Saturday afternoon for its second meeting with the Pioneers in 10 days. Tipoff is scheduled for 3:00 p.m.