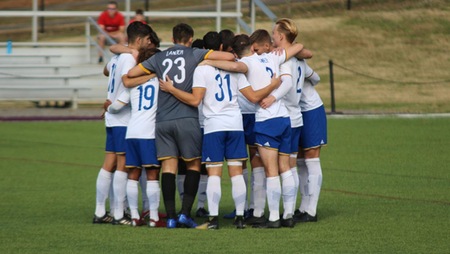 The eighth-ranked Lander men’s soccer team netted a goal in the 84th minute, but fell short in a comeback attempt against 20th-ranked Barry, falling 2-1 in the NCAA Tournament quarterfinals on Sunday afternoon at Young Harris College.

Barry took a 1-0 lead at the 38:10 mark when Lucas Russo delivered a free kick into the upper-right corner, snapping Lander’s program record streak of holding opponents scoreless at 942:26.

The Bucs increased the lead to 2-0 in the 68th minute on a Luca de Biase shot inside the near post.

The Bearcats fought back to find a goal at the 83:51 mark when Sia Jamedar deflected a shot in on the goal line to put Lander on the board. With 10 seconds remaining, the Bearcats earned another corner kick, but had the ball knocked out of play to end the match.

Bearcats can punch ticket to postseason on Senior Night