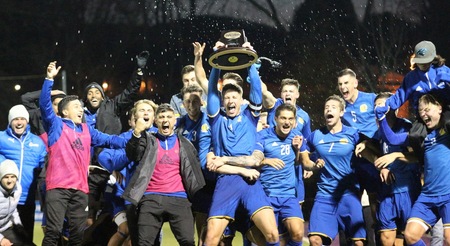 No. 8 Lander topples No. 1 Young Harris to win the Southeast Region title:

In a season marked by an historic streak of defensive play, it was Lander’s defense that rose up in the biggest match of the year to date.

Senior defender Jordan Skelton headed home a pass from fellow senior Oliver Brock in the 31st minute and the Lander defense turned away five shots and five corner kicks while playing a man down over the final 14:27 of play as the second-seeded and eighth-ranked Lander men’s soccer team defeated top-seeded and top-ranked Young Harris, 1-0, to win the NCAA Division II Southeast Regional for the third time in program history.

Lander (16-1-3) advances to face either Barry or Lynn on Sunday at 1:00 p.m. with a trip to the Final Four at Highmark Stadium in Pittsburgh, Pa., on the line. Young Harris (17-1-1) saw its 25-match unbeaten streak at home snapped as the Mountain Lions dropped a home match for the first time since Sept. 10, 2017.

“I’m just unbelievably proud of the boys,” said head coach Lee Squires. “We knew it was going to be that type of game where we’d almost cancel each other out. Tt came down to set pieces, goal-line scrambles, you name it, it probably happened. It was a tough environment against a very, very good team. They’re number one in the country for a reason. I’m just incredibly proud of the players to come away from home, to battle like they did, to play the last 15 minutes with a man down, and have that one moment to get the goal. The boys executed the game plan unbelievably well.”

The Bearcats netted the night’s only goal at the 30:49 mark when Brock, following a Mountain Lion foul, delivered a direct kick into the box. Skelton sent the ball towards the near post and rolled it just inside to give Lander the lead. The goal was Skelton’s team-leading eighth of the season, while Brock was credited with his seventh assist of the year, tops on the team.

From there, the Bearcat defense took control, withstanding a barrage of 12 Young Harris shot attempts and nine Mountain Lion corner kicks in the second half. Freshman goalkeeper Jacob Withers made three saves on the evening as Lander extended its program-record shutout streak to 904:16.

The Bearcats won Southeast Region titles in 2001 and 2005. Lander is searching for its first Final Four appearance in program history.

No. 10 Bearcats set sights on in-state PBC battle at USC...