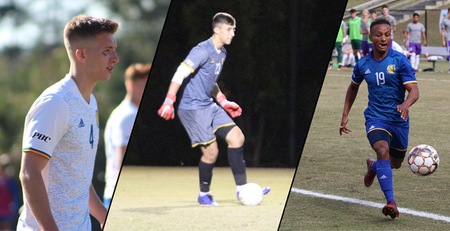 Skelton, who was also a first-team all-region performer last season, has started all 19 matches this year. The Bearcat captain and first-team all-PBC selection leads the team in goals (7), ranking second in the conference in game-winners (4). He leads a Bearcat defense that has allowed 0.35 goals per match this season and has not surrendered a goal in its last 814:16 of action.

Withers emerged as one of the league’s top keepers in his first season at Lander. In 14 starts, the second-team all-PBC selection has posted 12 shuouts, leading the conference in goals against (4), goals-against average (0.27), save percentage (.913) and shutouts.

Chretien ranks eighth in the league with five assists on the season, adding two goals. The sophomore earned his second all-region accolade in as many seasons from D2CCA

The Bearcats are 15-1-3 and face top-ranked Young Harris in the Southeast Regional championship match on Friday afternoon at 4:00 p.m., in Young Harris, Ga.