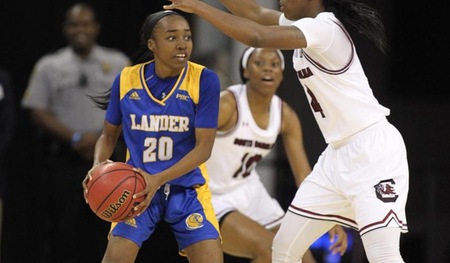 The Lander women’s basketball team scored 41 first-half points and trailed 10th-ranked South Carolina by just 10 points at halftime before falling to the Gamecocks, 100-62, in an exhibtion game on Friday night in Colonial Life Arena.

The Bearcats, playing their second Division I opponent in six days, became the first team to break 60 points against the Gamecocks in an exhibition since 2008 and played South Carolina to its closest exhibition contest since 2011.

Lander never trailed by more than 10 in the first quarter and a three-pointer by Hamilton at the 7:43 mark of the second quarter capped a 10-2 run that pulled the Bearcats to within five points. Lander trailed 51-41 at halftime after shooting 48.5 percent in the opening 20 minutes.

Lander begins its season on Friday, Nov. 9, when the Bearcats face Lenoir-Rhyne in the PBC/SAC Challenge in Jefferson City, Tenn., at 5:00 p.m.