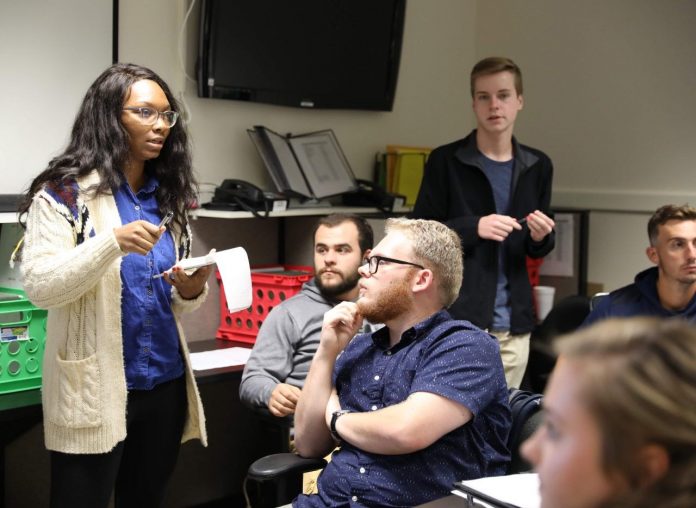 Through a disaster training exercise with the Greenwood County Emergency Management Department, students in Lander University’s Emergency Management class got a hands-on look at how state and local authorities allocate and utilize available resources to ensure public safety during times of disaster.

Under the leadership of George McKinney, Emergency Services Coordinator, the simulation was held in the Emergency Operations Center in the lower level of the Greenwood County Courthouse. For the simulation, McKinney led the Lander students through a re-enactment of the March 25 gas leak near the Carolina Pride plant in Greenwood.

During the actual event, all residents in the surrounding community were evacuated due to the leaking of a deadly gas. “The leaked gas was anhydrous ammonia, which quickly overwhelms and can kill anyone in close proximity within two minutes,” explained McKinney. “We were fortunate that night, however, as heavy rainfall saturated the air and ground, and there were no reported injuries.”

According to McKinney, effective communication and collaboration were a difference maker in evacuating the affected neighborhood. “The call about the leak was received around 12:30 a.m. Soon after, police and firefighters went door-to-door to help evacuate members of the community.

During the training exercise, Lander students were divided into teams, and given specific roles in responding to the emergency. Through the Emergency Management Department’s complex computer networking system, students were able to establish an incident command center, locate and deploy emergency vehicles, identify nearby shelters, arrange for food and other necessities for evacuees, coordinate with state emergency agencies, and craft and distribute informational messages to those throughout the affected community.

For Courtney Cannon, a Lander political science major from Greenville, the exercise was eye opening in that it taught her emergencies rarely go by the book. “It’s tempting to think that you’ll be able to rely solely upon what you’ve planned for in advance, but this exercise taught us that in most emergency situations, you’ll have to depend upon what’s available to you at that time,” she said.

Through its master’s degree offering in Emergency Management, Lander is uniquely prepared to train professionals from practically any background in the science of management during natural and mad-made disasters. The university also partners with the Greenwood County Emergency Management Department, and serves as a host command center when needed.