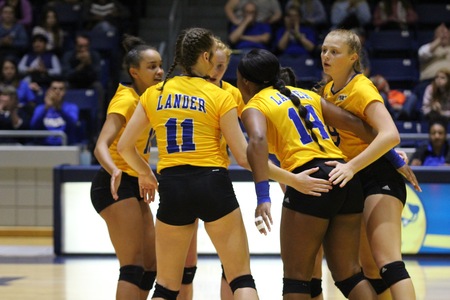 The Lander volleyball team suffered its first home defeat of the season on Tuesday night, falling 3-0 to USC Aiken in a battle of the top-two teams in the Peach Belt Conference. The Bearcats fell to the Pacers 25-23, 27-25, 25-21.

USC Aiken scored the first seven points of the night before Lander mounted a rally, pulling back to within a point at 24-23 before the Pacers ended the comeback with a kill from Anita Cookey-Gam.

The Bearcats fell behind 16-11 in the second set and trailed 18-15 before kills from Kaitlyn Krafka and Madilyn Reed were followed by a Pacer error, tying the set at 18-18. From there, the teams battled to five ties over the next 14 points, but USC Aiken recorded back-to-back kills to take a 2-0 lead in the match.

The third set saw Lander take a 6-2 lead before the Pacers reeled off seven consecutive points to take a lead they would not relinquish.

Krafka posted Reed each posted their 12th double-doubles of the season. Krafka recorded 17 kills and 11 digs, while Reed finished with 31 assists and 10 digs. Hannah McManus registered a team-high 22 digs.

Bearcats In The Pros: McCullough extends streak, another win for Jones