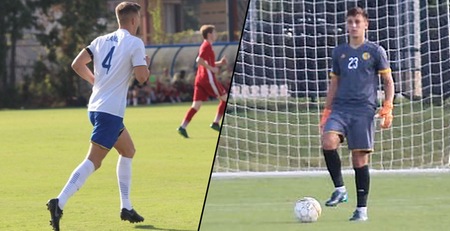 Withers recorded two shutouts and made five total saves in a draw at Chowan and a win at Georgia Southwestern. The freshman goalkeeper has registered seven shutouts this season in nine starts while maintaing a goals against average of 0.42 and a save percentage of .857, leading the conference in both categories.

Skelton assisted on Lander’s game-winning goal at Georgia Southwestern and led the Bearcat defense to a pair of shutouts. The senior captain has anchored Lander’s defense throughout the year as the Bearcats have blanked 10 of their 14 opponents this season and have posted shutouts in four of their five PBC matches.

The awards give Lander 12 PBC weekly honors this season, tying a program record set in 2016. The 10th-ranked Bearcats travel to Clayton State on Wednesday afternoon.

Bearcats down Clayton State in road battle, 2-1, on Taylor’s overtime...