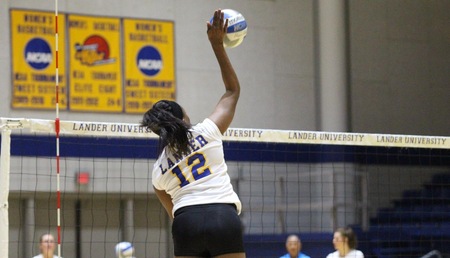 The Lander volleyball team earned a 3-0 win over Converse on Tuesday afternoon behind its best offensive output since the season opener. The Bearcats defeated the Valkyries 25-13, 25-18, 25-23.

The Bearcats jumped out to a 9-2 lead in the first set and capped the set with a 9-0 run as Converse (4-18) made three consecutive errors to end the opening set and give Lander a 1-0 lead.

Converse scored the first three points of the second set and only trailed 12-11 before Lander grabbed control of the set with six straight points. Hannah Hritz closed the set with a kill as the Bearcats moved ahead 2-0.

In a back-and-forth third set that featured 10 ties and seven lead changes, Kaitlyn Krafka recorded Lander’s final two points to give the Bearcats’ their 11th sweep of the season.

Lander goes back on the road Thursday night as the Bearcats face Emmanuel at 7:00 p.m.