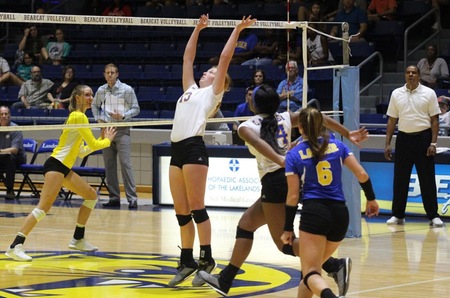 The Lander volleyball team hosts a pair of matches this weekend, beginning the Peach Belt Conference portion of its schedule against Francis Marion on Friday at 7:00 p.m. and battling Clark Atlant at home on Saturday at 1:00 p.m. Lander was originally scheduled to face UNC Pembroke at 1:00 p.m. and Clark Atlanta at 6:00 p.m. on Saturday, but flooding from Hurricane Florence forced UNCP to postpone Saturday’s match.

• Francis Marion (8-5) is coming off a 3-0 weekend at the FMU Tournament and has won five of its last six outings.

• Lander trails the all-time series against Francis Marion, 24-16. The Bearcats won a five-set match last year against the Patriots.

• Clark Atanta (0-3) is looking to win its first set of the season, having been swept by Southern Wesleyan, Emmanuel and Augusta.

• Kaitlyn Krafka has posted a double-double in each of her last six matches and Madilyn Reed set a career-high with 49 assists in a win over Limestone on Tuesday.

Lander returns to action with home match against Augusta