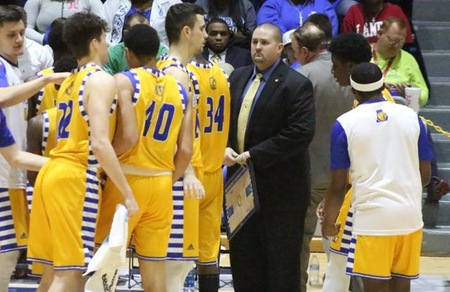 Lander men’s head basketball coach Steve Roberts has announced the signings of eight newcomers to the Bearcats for the 2018-19 season.

Three signees hail from Georgia, two come from North Carolina, and the Bearcats landed one signee from South Carolina, Virginia and Florida.

Scott Harvey, a 6-8, 190-pound forward from Cornelius, N.C., led Statesville Christian School to a school-record 27 wins. As a senior, Harvey averaged 11.2 points, 8.5 rebounds and 3.5 blocks in 2017-18. He finished his prep career with 1,410 points and was a 2018 All-Iredell County second-team selection. Harvey ranked second in the state of North Carolina with 115 blocks and was a two-time All-SPAA Conference performer.

Jamarius Hairston, a 6-4, 175-pound guard from Salisbury, N.C., helped guide Jesse Carson High School to a 26-3 record. Hairston’s team won the conference championship as well as the conference tournament, along with a sectional championship and the Sam Moir Christmas Tournament title. He averaged 20.5 points per game and shot 42.5 percent from three as a senior. Hairston finished his career with 1,659 point, making him the second-leading scorer in school history.

Jamonty Williams, a 6-7, 195-pound forward from Florence, S.C., led Wilson High School to an appearance in the South Carolina 4A State Championship. Williams was a two-time second-team All-Region player and helped Wilson H.S. finish his senior season with a 20-4 record. He was named Conference Defensive Player of the Year and Conference Dynamic Player of the Year.

Elijah Alston, a 6-5, 190-pound wing from Brunswick, Ga., spent two years at Piedmont College, where he started 24 games as a sophomore and averaged 12.9 points and 9.2 rebounds per game. Alston was an All-Conference USA South honorable mention and was named to the Dean’s List three times at Piedmont College.

Justin Holliday, a 6-3, 190-pound guard from Marietta, Ga., led Lamar Community College to 47 wins in two seasons. As a sophomore, Holliday played in all 32 games, averaging 10.9 points and 4.7 rebounds per game. Holliday was an academic All-Reigon selection in 2017-18. During his freshman season, Holliday averaged 7.7 points and 2.8 rebounds in 24 games.

Morris Robinson, Jr., a 6-2, 175-pound guard from Leesburg, Va., was a two-year starter who guided Fredrick Community College to a 22-6 record and a No. 7 national ranking among NJCAA Division II junior colleges. Robinson was first-team All-Maryland JUCO and second-team All-Region in 2018, averaging 13.6 points and 2.5 assists per game as a sophomore.

Marquel Wiggins, a 6-7, 195-pound forward from Olgethrope, Ga., ranked seventh in the nation in offensive rebounding for South Georgia Tech in the NJCAA ranks. Wiggins averaged 9.3 rebounds and 15.8 points per game, leading the Jets to a 20-12 record and a second-place finish in the Georgia Collegiate Athletic Association. Wiggins was a first-team All-Region performer in the GCAA.

Warren Goulbourne, a 6-6, 220-pound foward from Riviera Beach, Fla., helped lead St. Petersburg Community College to a 19-14 record last season. In 2016-17, Goulbourne guided Graceland College to a 20-12 mark. As a senior at Cardinal Newman High School, he was named an All-County Honorable Mention.