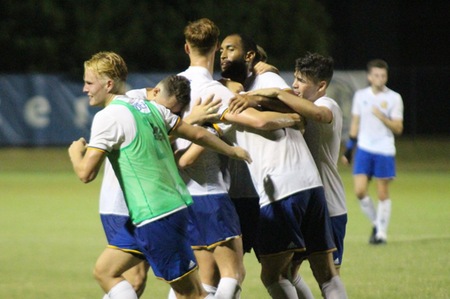 The 10th-ranked Lander men’s soccer team stayed unbeaten with a pair of Jordan Skelton penalty kicks to earn a 2-1 victory over Tusculum on Saturday night at Van Taylor Stadium.

“I thought we played well on the night,” said head coach Lee Squires. “There are some things we can improve on, we created a lot of chances on one end and made a mistake on the other. I’m delighted with the character we’ve shown and if we can clean things up, it may be a little more comfortable for us, but you can’t argue with 3-0 and we move on to Wednesday.”

Lander took the lead in the 16th minute when Robbie Young was tackled in the box, earning a penalty kick for the Bearcats. Skelton converted the shot, rolling it past the diving effort of Pioneer keeper Alejandro Quiriti to give Lander a 1-0 lead.

Tusculum answered at the 61:07 when a misplayed ball allowed Dario Ljubic to fire a shot into an empty net to even the match at 1-1.

In the 86th minute, Lander broke through as the Bearcats drew another foul in the box on a free kick. Once again, Skelton delivered, putting Lander up 2-1 on a shot to the same spot. The goal was Lander 21st consecutive made penalty kick, a streak that dates back to the opener of the 2017 season.

The Bearcats take their first road trip of the season on Wednesday to face rival Erskine at 7:30 p.m.

Bearcats come up short in 64-58 loss against Erskine