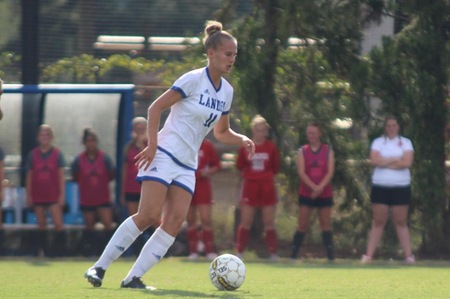 Lander knocks off Wingate with tough 1-0 road win:The Lander women’s soccer team continued its strong start to the season with a 1-0 road win over Wingate on Saturday night.

The win is Lander’s second road victory of the season, marking the first time the Bearcats have won their first two matches away from home in a year since 2014.

Lander broke a scoreless tie in the 62nd minute when Emily Jermstad found Juliette Vidal racing into the box. Jermstad crossed a pass in from the left side and Vidal buried the shot into the right side of the net to give the Bearcats a lead they would not relinquish.

The Bearcats outshot the Bulldogs 19-12 on the evening and attempted five corner kicks to Wingate’s two. Lander fired 11 shots on goal, while allowing just four from Wingate.

Sarah Owen recorded a clean sheet for the second time this season, notching four saves in the victory.

Lander travels to rival Erskine on Wednesday night for a 5:00 p.m. match.