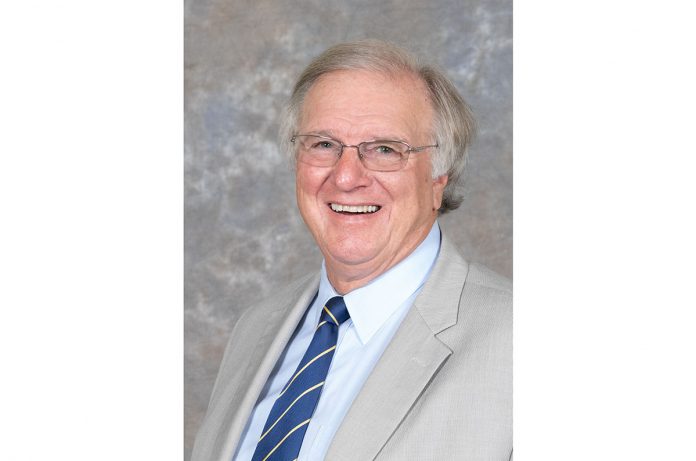 After 46 years of serving the students of Lander University, H. Randall ‘Randy’ Bouknight, Vice President for Student Affairs will soon assume a new role of service as a special ambassador for the university.

His new duties will incorporate a blend of community and alumni relations, cultivating new relationships and calling on longstanding friendships to increase support for Lander students. Lander President Richard Cosentino expects Bouknight’s new position to be a driving force in the development and success of the university.

“With over 40 years of service at Lander, Randy has extraordinary knowledge and insight into the university and surrounding community,” said President Cosentino. “Because of this unique perspective, he is the ideal person to assist us with alumni and community relations.”

With a master’s degree in College Student Personnel Services from Northwestern State University of Louisiana, Bouknight was fresh out of college when hired in 1972 by Don Herd, Jr., Lander’s eighth president.

“I first met Randy when I was working in the President’s Office as a temporary employee back in 1979,” said longtime assistant Pam Bartley. “I had no idea that he would end up being my supervisor for over 38 years.”

Over the decades, Bouknight’s responsibilities expanded into overseeing a comprehensive division that focuses on all areas that relate to the comfort, health and safety of Lander students. His far-reaching network of departments includes the offices of Housing and Residence Life; Career Services; Student Activities; Campus Recreation and Intramural Sports; Student Health Services; Disabilities and Counseling Services; the Equestrian Center; Food Services; and the University Police.

He also oversees the university’s Behavioral Invention Team, the Office of Student Conduct, the Student Handbook, and is Advisor to the Student Government Association (SGA).

During the Spring 2018 Student Life Awards ceremony, Bouknight was recognized for his years of service and outstanding contribution to the university. Met by a standing ovation, the highly regarded Vice President for Student Affairs was honored by words of appreciation, admiration and respect by his team of professional staff members and President Cosentino.

Cindy Dysart, Director of Housing and Residence Life, spoke to those attending. “Randy has played a significant role in who we are, what we stand for, and what makes us unique – and we are all the better for it,” she reflected.

Linda Dolny, chair of Lander’s Board of Trustees, first met Bouknight in 1993 and attributes him as being an important part of Lander’s success. “I am personally going to miss Randy in the role he has held for so long, but he will be assisting Lander in meeting new challenges” she said. “I am excited to work with him in this new opportunity.”

“I have enjoyed the collegiate environment – and while I have had job offers at larger universities, as well as in the business sector, I always knew that Lander and Greenwood were where I belonged” reflected Bouknight.

A new office awaits Randy Bouknight to enter it’s doors and step into yet another successful chapter of his life of service to students of Lander University. When he’s not traveling across the region to reconnect with alumni in their hometowns, Bouknight will be meeting with community leaders and businesses to ignite a strong foundation of support for Lander students.

Lander just completed a nationwide search for a new Vice President for Student Affairs. Dr. Boyd Yarbrough, who comes to Lander from Cleveland State University, is expected to take the lead on August 1.

Bouknight can be found under the roof of the Lander Foundation and Alumni Center on 302 Hampton Ave, where he will be easily accessible to alumni and the Greenwood community.