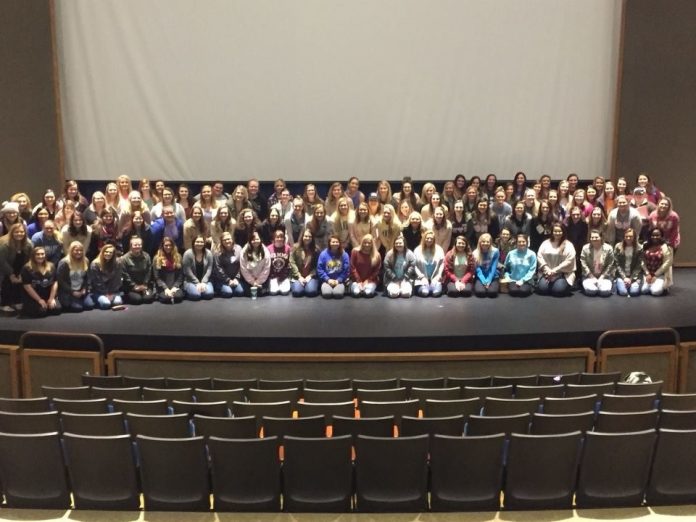 The women of Zeta Tau Alpha, Phi Mu and Gamma Phi Beta make up Lander’s College Panhellenic Council. Last week, these women gathered together to hear Annalise Sinclair, a speaker focusing on the Greek community.  Sinclair spoke about her sorority experience and her struggle with mental illness during her college years.

Annalise Sinclair is  a sister of Alpha Omicron Pi while in college, but was also silently struggling with bipolar disorder. She spoke about how she saw the sisterhood in her sorority go from an all-time low to an all-time high in a span of two years. On top of that, Sinclair relived her memories about when she finally started telling people about her mental illness and how it impacted everyone she knew. Several people immediately contacted her about how they wished they would’ve known earlier because they were struggling with mental illness as well.

Members in the audience were clearly touched by this story as anyone who was there could feel the mood in the room change slowly from the beginning of the program to the end. Through the support of Sinclair, the love of the members within the chapter became more known throughout the night and each woman who was there walked away with a little something extra to help their sisterhood grow within their chapters.

Madison Tripp, the President of the Panhellenic Council, said she was blown away by the feedback she received from different members of Panhellenic Executive Council at Lander and even within her own chapter.

“It was really exciting to see the three chapters get together and hear something so vulnerable as a Greek community,” Tripp said. She also stated that, “While members of each sorority are friends with each other, it was nice to have everyone in one big setting. It doesn’t happen that often because each sorority is usually so busy with things in their own chapter. I think the chapters enjoyed it, and we hope it impacted them as much as it impacted us.”

This was the first event of the semester that Panhellenic Council has hosted. The next Panhellenic event will be Mr. Lander on Feb 6, during Homecoming Week.

Lander Day of Giving a Success