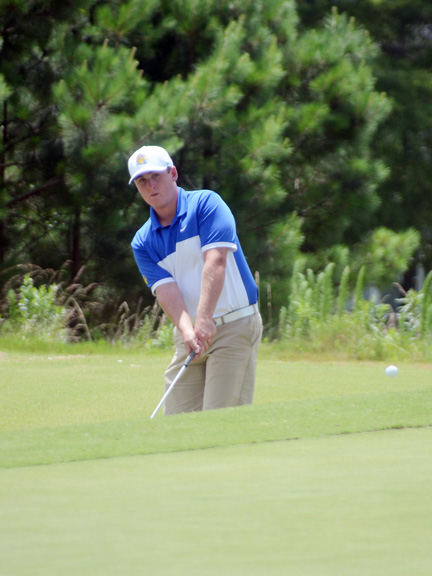 Heading into the spring 2018 golf season, Lander sophomore, Jon Parker, is looking forward to building on the success of his freshman campaign. “I’d have to say that my freshman season was pretty good overall,” Parker stated. “Even though I didn’t play to what I think my full potential is, I did have a few good tournaments.”

Parker played in 8 events as a freshman with a stroke average of 76.04. He was also named Peach Belt Conference “Player of the Week” from March 16-22. Parker’s best finish was a tie for 3rd at Lander’s home event, the Bobcat Invitational at Greenwood Country Club.

“I shot a 68 in the final round which was my best round of the season,” Parker said. Parker’s good play continued into his sophomore season in the fall of 2017 where he shot his personal best as a Bearcat with a 67 at the North Georgia Fall Invitational. “I was actually leading the tournament at one point but ended up falling a few shots short”, stated Parker.

When asked about the hardest part about the jump from high school to college golf, Parker stated, “The competition is so much tougher.” “Every single team has good players that can really shoot low scores.” “Our team is really good and that makes it even harder to stay in the lineup to play in tournaments.” “You really have to dedicate yourself to staying on top of your game or you won’t play much.”

This spring will be the final season that Lander Men’s Head Golf Coach, Roger “Chipper” Bagwell will be leading the team as he is set to retire after the season. “We have one of the toughest strength of schedules in all of Division II”, said Parker. “As a team, we are really hoping for the best this season as it’s Coach Bagwell’s last and the entire team wants to send him off on a high note.”

As far as personal goals for this spring, Parker is looking to keep fine tuning his game with practice and steady improvement. “I’m really looking forward to playing some high competition tournaments and building on my freshman season”, stated Parker.
The spring 2018 Men’s Golf season begins with the Spring Kickoff Invitational on February 12th and 13th in Fleming Island, Florida.