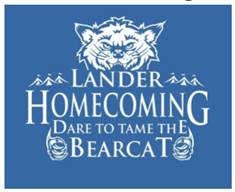 Lander Homecoming is just around the corner. It begins February 6. Each day of Homecoming Week has a new competition. All Lander students, faculty, and staff are allowed to participate. Each team must have at least one member attend an information session to participate in the competitions. This year’s theme is carnival based.

On Monday, teams will promote their creative and carnival themed banners in order to cheer on the Bearcats to victory in the Homecoming game. There will also be a soap box race and car judging taking place during the afternoon. Later, there will be a human cannon ball bowling event. On Tuesday,  life-size checkers will be played in the Finis Horne Arena for a single elimination competition. On Wednesday, students should attend the women’s and men’s basketball games to cheer them on. During halftime, there will be a human ring toss that teams will participate in.

On Thursday, The Jake Bartley Band, one of Greenwood’s most popular band, will be playing! Friday’s events include different competitions throughout the evening, including: a ping pong toss, a chariot race, twister, a horse relay race, and a special event called “unpack the carnival.” Saturday will wrap up the week with a 5K run/walk benefiting the Lander Excellence Fund, which will help students achieve sincere success!

The beginning of the “New Voices”