The Miss Lander Pageant is an annual event that happens in the Fall semester. This event is presented to Lander by the National Association for Music Education (NAfME) in hopes of raising money to support fine arts. This year’s pageant will be held Monday November 6, 2017 in the Lander auditorium. The theme is the Great Coral Reef.

The competition is open to any full time female student with a minimum of 12 credit hours. Only 25 contestants are allowed who have completed their applications and paid their entry fee will be allowed to compete.  Contestants have two packed days of rehearsal. They are also encouraged to list a sponsor in the program to show gratitude for the contributions.

Contestants are judged on modeling professional attire, an intellectual answer to an on-stage question, a talent of their choice, and show casing poise and grace while wearing their evening grown.

Anyone is welcome to attend the pageant. Guest of the pageant are also encouraged to vote for the People’s choice award which will be located at a table outside of the auditorium.

At the end of the pageant there will be an award ceremony. The following awards will be granted; Miss Congeniality which is voted by her fellow contestants, talent winner, people’s choice, 2nd runner up, 1st runner up, and the last award Miss Lander.

“I have gained better public speaking skills, and learned how to be more prim and proper when it comes to representing an organization or university” states Haley Moore former Miss Lander 2014-2015.

Moore also adds, “My advice to the ladies competing for the Miss Lander Pageant is to be confident and stay true to who you are when performing and competing on the stage”.

Make sure to save the date for a night of glitz, glam and beautiful women! For more information regarding pageant information email aamen.johnson@lander.edu, co-president of (NAfME). 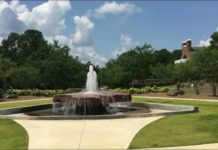