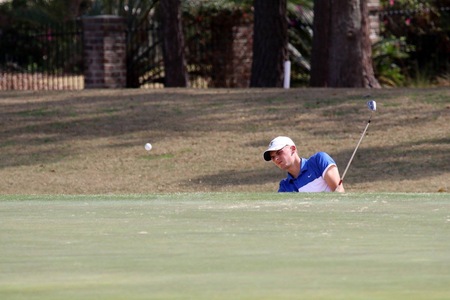 GREENWOOD – The Lander men’s golf team posted a 579 during its opening two rounds at the Cougar Invitational on Monday to take a share of 10th place with Lee after day one at the Country Club of Columbus.

The Bearcats stand just four shots away from the top-five on a tightly bunched leaderboard, as nine shots separate fourth place from 10th place after the first two rounds at the par-71, 6,515-yard layout.

Lander’s Michael Brodie led the Bearcats in the individual race, firing a pair of 1-under 70’s to grab a tie for eighth place. The junior opened with two birdies on his first three holes and shot six total birdies on the day.

Sophomore Conor Richards turned in Lander’s best score of the day, shooting a 3-under 68 in the first round, posting a 140 two-round total to finish the day tied for 12th place. Fellow sophomore Jon Parker is tied for 50th place.

The Bearcats will begin their final round at 10:15 a.m. (EST) tomorrow and will be grouped with Clayton State and Lee. Live scoring is available at birdiefire.com.

No. 22 Lander looking to bounce back against Converse on Monday...