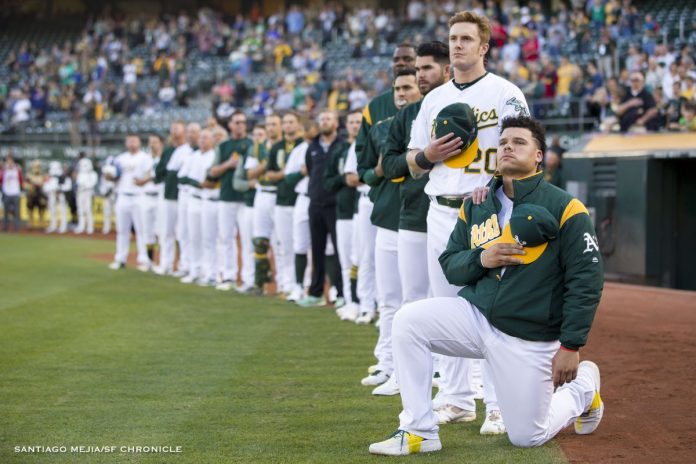 On the morning of September 23, 2017 President Trump tweeted “If a player wants the privilege of making millions of dollars in the NFL, or other leagues, he or she should not be allowed to disrespect our Great American Flag (or Country) and should stand for the National Anthem. If not, YOU’RE FIRED. Find something else to do!”

On the afternoon of September 23, 2017 Bruce Maxwell of the Oakland Athletics became the first member of the Major League Baseball team to take a knee during the national anthem. Since 2016, several professional athletes have protested during the playing of the United States’ national anthem.

I’ve talked randomly to several Lander students about how they felt about this matter:

Felicia Martinez, senior biology major felt that “Our president really took the time to tweet of inequality of man because players are protesting the anthem? What about why these players feel the need to take a stand in the first place? Where is their equality Mr. President?”

Jerrell Wilkins, freshman chemistry major said that he doesn’t understand why a man with such power like the president would be “okay with such division of man and their rights.”

While a student who prefers to stay anonymous stated that “Why would these major league players feel a need to start a war with America? These major league players are being very ungrateful. You’re a millionaire who gets to go home to your millionaire house, you couldn’t truly understand inequality. I hope everyone who takes a knee loses their job”

Maxwell the 26-year-old catcher, took to twitter to explain why he finally decided to take a knee. “The only way we can come together is by informing. To single out NFL players for doing this isn’t something we should be doing.” He also tweeted “This now has gone from just a Black Lives Matter topic to just complete inequality of any man or woman that wants to stand for Their rights!”

Oakland Athletics released a statement. “The Oakland A’s pride ourselves on being inclusive. We respect and support all our players’ constitutional rights and freedom of expression.”

The question now is whether America will support these major league athletes if they decide to take a knee, the way that the Oakland Athletics supported Bruce Maxwell.

Don’t Turn That Dial: Defy Your World; Dare to Live In Theirs

Q&A Why did you choose Lander?