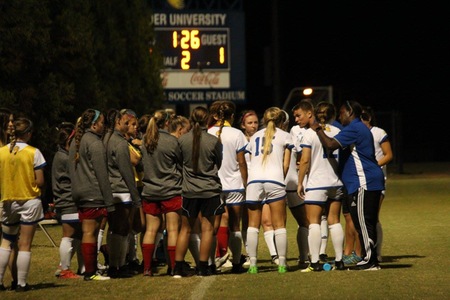 GREENWOOD – The Lander women’s soccer team (3-1) returns to the pitch for its Peach Belt Conference opener on Saturday evening, as the Bearcats play host to Clayton State (2-1) at 5:00 p.m. at Van Taylor Stadium.

• Lander dropped its first match of the 2017 season last Saturday, falling to Wingate in double-overtime 2-1. Sophomore Lauren Shuba scored her first career goal in the loss. The Bearcats were scheduled to travel to Emmanuel on Monday night, but the effects of Hurricane Irma caused that match to be postponed.

• The loss to Wingate snapped a three-match home winning streak for the Bearcats that dated back to last season.

• Lander is looking to win three of its first four home matches for the first time since 2013.

• Senior forward Hannah Martin is currently tied for second in the PBC with three goals this season.

• Freshman goalkeeper Sarah Owen ranks second in the conference with a .875 save percentage.

• Lander has been awarded 26 corner kicks this season, tops in the conference.