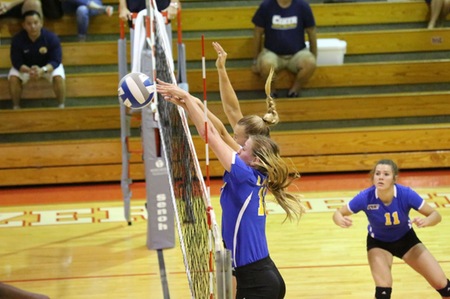 After splitting a pair of matches in the first day of the USC Aiken Volleyball Invitational, the Lander volleyball team (7-1) responded on Saturday by running through the competition in straight sets to notch the team’s seventh win of the season.

Senior Reyonia Whipple was named to the All-Tournament team as the Brunswick, Ga. native finished with 22 kills off an impressive .458 hitting percentage on the weekend.

Freshman right side hitter Hannah Hritz continued her exceptional play in the first match against Valdosta State (4-3). Hritz topped all Bearcats with nine kills off an efficient .261 hitting percentage. Sophomore libero Hannah McManus led the team with 16 digs to go along with four assists.

After taking the first set 25-20, the Bearcats jumped out to a commanding 23-15 lead in the second. With the game seemingly lost for Valdosta State, the Blazers rattled off an incredible eight straight points to tie the game back at 23. Unphased, Lander responded with two straight kills from sophomore Dale Rogers and freshman Megan Faris to take the dramatic second set victory. The narrow victory was the closest any team would come to beating the Bearcats as Lander rolled in the third taking the game 25-15.

Lander was in peak form against Mount Olive (3-5) as the Bearcats again won in straight sets behind 10 kills from senior outside hitter Kristin Martindale. The Trojans would challenge Lander in the third as Mount Olive tied the score at 18 in the closing stretch. However the Bearcats would not be denied as junior Sophia Perkins delivered a match point dagger off a service ace to complete the sweep.

Lander will be back in action on Friday at 7 p.m. as the Bearcats will make their home opener against conference foe UNC Pembroke (2-6).

Bearcats come up short in 64-58 loss against Erskine