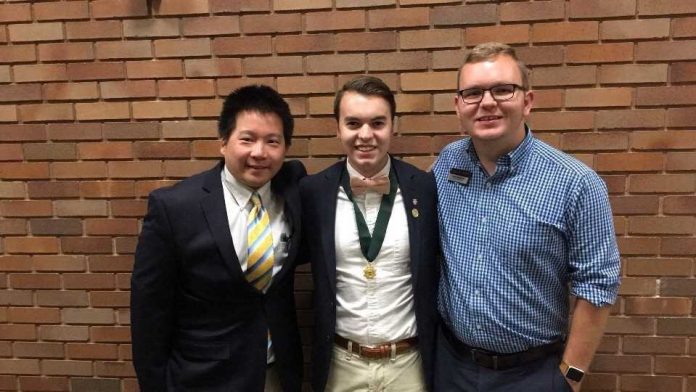 Jared Burgess, of West Columbia, recently received a prestigious national recognition: The Order of the Sphinx Award. A junior studying Chemistry at Lander University, Burgess is a member of Delta Sigma Phi, a newly colonized fraternity on campus which recognizes undergraduate leaders who have gone above and beyond to help make their chapter successful.

Nominated by the colony’s national consultants, Burgess is described as an extremely active student who has been involved in multiple roles across the university, making a positive impact on student life and contributing to the overall success of Lander and the fraternity.

Currently serving as Sergeant-at-Arms within Delta Sigma Phi, Burgess also represents the university as Presidential Ambassador; and was honored with the Betty Williams ‘Unsung Hero’ Award during the spring’s 2017 Student Life Awards.

Presented each year to the top 85 members nationwide, the esteemed Order of the Sphinx Award distinguishes those who have made significant contributions to their campus, local chapter, and to the fraternity on a national level. “Every single man in Delta Sigma Phi at Lander has contributed a great deal to the successes we have achieved” said Burgess. “To be recognized for my efforts was completely unexpected, but none-the-less a great honor.”

President of Delta Sigma Phi Wesley Hamilton feels privileged to work with Burgess on a regular basis and describes him as “always willing to lend a hand; a team player; and a man of great character.”

As a member of the only fraternity active on Lander’s campus, Burgess shares his thoughts about the stigmas surrounding Greek life and fraternities. “We (Delta Sigma Phi) would like to dispel those (stigmas), and show what a true fraternity is.”

Founded in 1899, Delta Sigma Phi is a national, not-for-profit fraternity that embodies the ideals of building men who live with courage; act with passion; and commit to excellence. The organization encourages and helps young men to become better students, leaders, citizens, professionals _ better men. The Lander chapter of Delta Sigma Phi was colonized in the fall of 2016. For more information about Delta Sigma Phi, contact Recruitment Chair, Matthew Campbell by email to Matthew.Campbell@lander.edu.