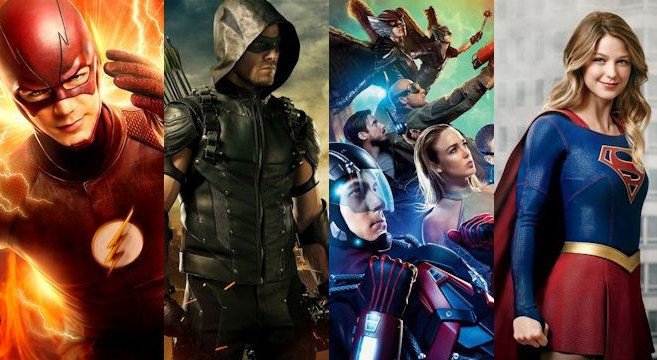 Seeing as though this is the last column of the semester, I felt it appropriate to revisit one of our first columns, and talk about the development of the shows that we discussed earlier in the semester.

The CW’s DC shows have crossed over several times over the years, but none of them have scratched the surface of what these four (or really three; we’ll get to that later) shows did last week. The network made use of the four shows airing every night from Monday through Thursday, and created an exciting, engaging serial narrative in which to drop its characters for a massive, comic book style crossover event known as “Invasion.”

This article will contain spoilers for the past four episodes of the CW DC shows. If you’re at all interested, and haven’t seen these episodes, I’d advise you not read any further.

The crossover event started off with Supergirl on Monday night. There actually isn’t much to say, in terms of the crossover. It was a normal episode, but with the set-up for the next three nights tacked on at the end of the episode. That’s not to say, however, that I didn’t enjoy the episode, though. It was fun and had some nice character development going on. I would rather it tie-in closer to the ensuing crossover, though, for it to properly be included with the rest of the shows. 7/10

The Flash picked up right where Supergirl left off on Tuesday night. This is the episode that really sold the crossover, gathering all the superheroes, and establishing the alien threat known as “the Dominators.” This episode wasn’t just a massive fan-fest of a crossover, though. It continued the ongoing story arc of the show, but somehow managed to make it work through the context of bringing so many outside characters into the mix. It really shows how focused the writers are on the story of Barry Allen, along with how they’re able to pull off a much larger story with many other characters. That’s why this universe works so much. 8/10

The story continues with Arrow, the next night. This is where I was afraid all the excitement and momentum built up in the previous part would slow down. That’s not the case, though. It’s a slower episode to be sure, but it’s in a good way. The episode not only exists as the next part of the crossover arc, but also the 100th episode of Arrow. The latter is where the episode succeeds the most. With “Team Arrow” out of commission, and captured by the villainous aliens, they are sent into a world of their dreams, where nothing went wrong. It’s sort of a reverse Wonderful Life scenario. It’s a particularly emotional episode, with some very strong performances from the cast, showing a range of emotion, perfectly setting the right tone. It was a great episode for longtime fans such as myself, with tons of callbacks and references to previous episodes. All in all, this part of the crossover proved to be one of the strongest stand-alone episodes of Arrow in a long time. That’s really saying something. 9/10

Thursday’s edition of Legends of Tomorrow served as the conclusion. I’m still behind on this show, so I’m not quite sure of what all has happened. What I do know, though, is that this was an extremely satisfying ending to a great four-night adventure. The real showdown between hero and alien begins. Not only is there great action, but there’s also great character building moments, which is something that the writers do a good job balancing in general. For a show about super humans and aliens, this episode ends in such a beautifully human way. It’s great. 8/10

Tune in next semester for new “Don’t Touch That Dial.” Until then, have a merry Christmas and a happy holiday season!