Reed Gray is a senior, mass communications major, and catcher for Lander Bearcats. Reed has been to the World Series twice with the Bearcats.

In high school, I was fortunate enough to be surrounded by many of the game’s great talents. My high school baseball coach was Hall of Fame third baseman, Wade Boggs. One of my teammates was Dwight Gooden’s sons. So it wasn’t uncommon to show up to the field surrounded by some of the best to ever step between the two white chalk lines.

However, while I was privileged to be around men who acquired nicknames such as Mr. 3000 in Wade Boggs, and Dr. K in Dwight Gooden, some of my most memorable moments come from playing against Miami Marlins star, Jose Fernandez. Jose was someone who seemed to be larger than life, both physically and in spirit. He could stand on the moun

d and without even delivering a pitch; you knew you were already beat.

Growing up playing baseball in Florida, it wasn’t uncommon to have professional scouts at your games due to the abundance of talent throughout the area. However, one night we were playing Alonso High School, and Jose had the ball. He was warming up in the bullpen and a plethora of scouts made their way down to the opposing bullpen to watch Fernandez throw his warm up pitches. They surrounded him like a swarm of bees. He wasn’t even facing batters yet and these scouts had to have been in awe of his electric fastball and wipe out slider. There must have been upwards of 50 MLB scouts from across the country to watch him pitch that night, and he didn’t disappoint. Fernandez no hit us which seemed to become a trend he liked to continue to fulfill when facing my team.

Yet another time, when we faced off with the future MLB All-Star, our first baseman ran into a ball off of him. The ball quickly left the yard, and sailed over the fence. It was shocking. The only comparison I can draw that would do this justice is David taking down Goliath. Because our first baseman had just done the impossible.

Then, later in the season, we ran into Fernandez again in the playoffs. Before the game, I crossed paths with Jose. Reluctantly, I asked him if he was pitching that night. He answered, “Yes, I like pitching against you guys” in his thick Hispanic accent, with a big smile on his face. I countered his grin by saying “Well of course you like pitching against us; you always throw a no-hitter against us”. Again he grinned and replied, “Yes, but you guys make me compete. It is a fun competition”. I can’t certainly remember the outcome, but again he dominated, and I think it would be safe to say he no hit us again.

Aside from blowing fastballs by us, and spinning us in circles with his breaking ball, Fernandez also shined with the bat. He hit monstrous homeruns against us, several times. And each time, he rounded the bases like a man on a mission, because he was on a mission. Yet he still sported a smile from ear to ear. In my limited interactions with the iconic, Cuban flamethrower, he approached the game with pure joy.

However, adversity was no stranger to Fernandez. He tried to flee his native country of Cuba several times, and more than once was caught and placed in prison back in Cuba. But this didn’t detour him from chasing his dreams. He again attempted to make the trip over from Cuba to the United States. This trip they were successful. However, along the way, his mother fell off the boat. Without even knowing who had fallen in the water, Fernandez plunged into the deep, dark ocean to save the overboard passenger. It just so happened to be his mother. This courageous act is just part of the legend that Jose leaves behind, and this characteristic surely played a part in making him the tremendous player he was. 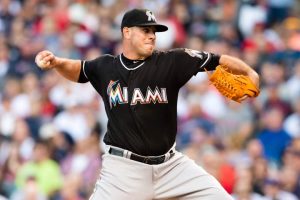 However, my favorite interaction with Fernandez is as follows. We were playing his team at home. Before the game, he confidently walked up to our dugout and approached Hall of Famer, Wade Boggs. He asked him, “Do you think I would be able to strike you out?”. I was dumbfounded. This guy, this high school pitcher, just asked one of the best hitters to ever play the game how he thought he would fare if he stepped in the box against him. Boggs responded, “Son, I would take you deep”. An answer only someone of Bogg’s stature could confidently say. Little did we know, that Fernandez would soon blossom into one of the game’s best, young pitchers. There is no doubt in my mind that had his time with us not been cut short, he would have ended up in the Hall of Fame alongside the one who he so confidently asked if he thought he could strike him out.

So today, when I woke up and saw the headline “Miami Marlins, Fernandez Dies in Boat Accident”, I didn’t know what to do, or how to take it. Fernandez was able to fulfill many of his dreams he so persistently worked towards. Although his time with us, and on the baseball field was cut short, he was able to capture the hearts of many young and aspiring baseball players, many of the members of the Hispanic heritage, and his family he so vividly loved. Fernandez played the game with passion and a whole lot of heart. I consider myself lucky to have crossed paths with this man, who impacted so many.