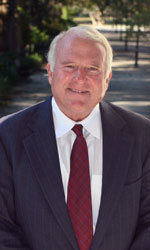 Robinson, who will lead Lander Athletics until a full-time athletic director is hired to replace the retiring Jeff May.

“Coach Les Robinson is well known and well respected throughout the collegiate sports world, and Lander is fortunate to have someone of his considerable experience and expertise to guide us through this interim period,” President Cosentino said. “With his background, he will be able to step into this role and quickly get up to speed, ensuring a continued strong program as we undertake a national search for a permanent athletic director.”

Robinson said he was “very impressed with Lander and the facilities,” which he toured recently on a campus visit. “But I was more impressed with all the administrators and what a team they were.”

After a career that spanned nearly 50 years in college athletics, Robinson, who was good friends with Lander’s legendary basketball coach and athletic director Finis Horne, ended his career as the athletic director at The Citadel in 2008.

“The first thing I want to do is to meet the coaches and get to know them,” added Robinson. “I want to hear where they are (with their team) and help them achieve their goals. The better you know (the coaches) and trust them, the more you can accomplish. I love sharing my knowledge.”

Upon completion of his playing days at N.C. State, where he graduated in 1965, he served as an assistant coach at his alma mater, Western Carolina University and The Citadel. He earned his first head coaching position at The Citadel (1974-85), and later coached at East Tennessee State University (1985-90), where he also served as athletic director, before returning to N.C. State as head coach (1990-96).

He replaced the legendary Jim Valvano as N.C. State’s head coach and was named the 1991 NABC District Coach of the Year following a 20-11 season and an appearance in the NCAA Tournament.

The 2007 NACDA/AstroTurf Southeast Region Director of Athletics of the Year, Robinson has served 14 years on the prestigious NCAA Division I Men’s Basketball Committee. The committee is responsible for determining site selection for the NCAA Tournament and picking at-large teams.

He also teaches an athletic administration class at The Citadel and continues to do clinics.