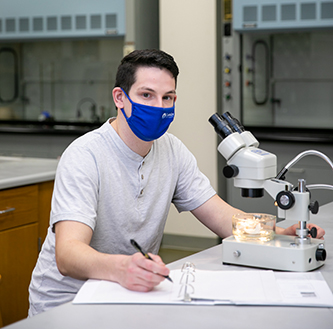 Lander University senior biology major Zach Barnard, who interned with Dr. Jennifer Lippens at Montague Eye Center, has been accepted by the Pennsylvania College of Optometry at Salus University, near Philadelphia.

His interest in optometry began as a second-grader, when he was fitted for his first pair of glasses. “I’ve always been amazed at how glasses work and help you to see things you couldn’t see before,” he said.

Barnard, who now wears contacts, began thinking about a career in optometry following a visit to his optometrist when he was in high school.

“When I asked him why he chose optometry, he told me, ‘Unlike other medical professions, where you may not be able to give someone a solution when they come in to see you, in optometry, almost every complaint that someone comes in with can be corrected easily with either glasses or contacts. And the best part is they will almost always leave with a smile on their face.’”

A resident of Warfordsburg, Penn., Barnard became acquainted with Lander through his aunt, who lives in Greenwood. “I always enjoyed being in this area when we would come down to visit,” he said.

As a freshman, he received the Science Scholar Award, conferred by the College of Science and Mathematics, and he has been on either the president’s honor roll or dean’s list during his entire four years at Lander.

He credited Lander’s biology faculty with doing a good job of preparing him for graduate school.

“They have developed a great curriculum that covers every area that I needed for my entrance exams and provided me an easy way to take all the prerequisite classes that I needed to apply. They were also very helpful in suggesting a timeline of when I should apply to schools, and in helping me develop my resume and CV,” he said.

Lander’s biology faculty are as complimentary of Barnard as he is of them.

“He was easily the best student in a principles of biology class that I taught. He caught on to everything so quickly,” said Associate Professor of Biology Dr. Emily Prince, who now teaches him ecology.

Professor of Biology Dr. Jennifer Maze, who is overseeing Barnard’s senior seminar, and previously taught him animal development and cell biology, called him “one of my top students in all three classes.”

Associate Professor of Biology Dr. Andrew Schwendemann praised Barnard as “an exceptionally bright student who has excelled in his courses at Lander. With the combination of his intelligence and what he learned through his coursework, I know he will do well in optometry school and go on to be successful in his field.” 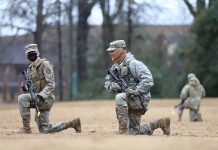 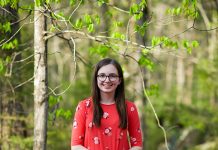 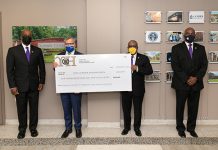