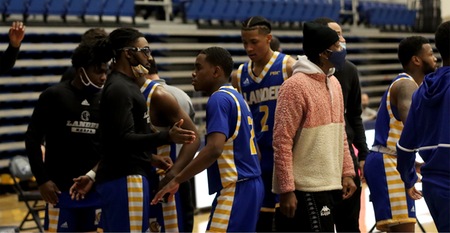 GREENWOOD – After back-to-back defeats on the road, the Bearcats look to return to form as they host the North Georgia Nighthawks at Finis Horne Arena this Saturday.

Where to Watch:  Bearcat Broadcast Network

Next Game for Lander: Jan. 27 at Flagler

· The most recent road stretch was not kind to the Bearcats, with the Blue and Gold losing a pair of close games to Georgia College and Augusta.

· Senior Deon Berrien is 19 points away from hitting 500 as a Bearcat. Berrien played two years at Northern Oklahoma College – Tonkawa before coming to Lander.

· Junior Jermaine Patterson is 34 points away from hitting 550 career points. Patterson was at Queens University the past two seasons before making his way to Greenwood.

· The Bearcats are fifth in the PBC in scoring with an average of 77.1 points per game and are first in free throw percentage hitting 79 percent of their free throws.

· Patterson is currently second in the PBC in free throw percentage, making 90.9 percent of his free throws. That is also good for the 43rd best percentage in the country. Patterson is also tied for 41st in the nation in total assists with 34.

· Lander is only second behind Georgia Southwestern in total blocked shots with 29 in the PBC. The Bearcats average 3.22 blocked shots per game.

· Senior DaJuan Moorer currently leads the PBC in total rebounds with 70 and is sixth in rebounds per game with 7.8. He is also first in total blocks with 14 and third with 1.6 blocks per game. Along with being in the top-10 among PBC players, Moorer is also in the top-50 for blocked shots per game with 1.56 (30th), double-doubles with 3 (T-11th), total blocked shots with 14 (6th) and is tied for 27th in total rebounds with 70.

· After his stellar performance, Robinson has moved up to sixth among PBC shooters with 2.3 3-pointers made per game. Berrien is 10th with 2.0 made 3-pointers per game.

· The last time these two schools met was last February as the Nighthawks won 85-77 on their homecourt. Robinson led the Bearcats with 20 points, nine assists and two rebounds off the bench. Berrien was close behind with 18 points, five rebounds, two assists and one steal.

· After defeating Flagler in their season-opener, the Nighthawks have been on a four-game skid. North Georgia most recently lost on the road to Columbus State 93-62.

· The Bearcats won’t have time to get comfy at home, as the Blue and Gold depart for another two-game road swing beginning next Wednesday starting with a trip to Flagler.

Candidates Square-Off in Debates at Lander University Days Before Election