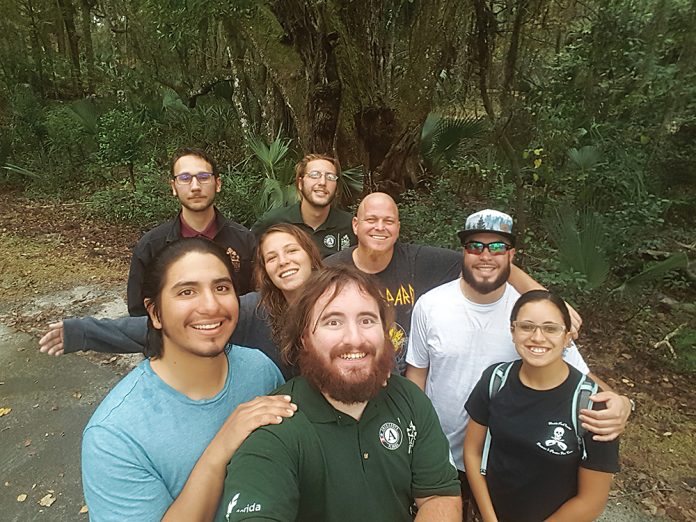 What do you do with a B.A. in English? That’s the question Ellison Smith ’16 contemplated after graduating with an English degree from Lander University. With a wealth of opportunities before him, and uncertain of where to begin, Smith ultimately decided on joining AmeriCorps and has spent the last two years working for Florida State Parks through the AmeriCorps program.

“My father was actually in the Peace Corps,” said Smith, “and he heard about AmeriCorps during his time there. He nudged me to go into the program, and honestly, it’s the best move I could have made.”

While many have heard of the Peace Corps, Smith noted that AmeriCorps is a companion organization that focuses on “stateside” community service projects in areas such as education, veteran assistance, disaster relief and conservation. Smith was first assigned to “Project A.N.T.” or “AmeriCorps Non-Native Terminators,” and spent a year helping to control the spread of invasive plant species within the Florida State Parks. “Each park I’ve worked in is gorgeous in its own way, but I do have my favorites,” Smith said. “John D. MacArthur Beach State Park in Jupiter is one of the best views of the Florida coast I could ever ask for.”

Now in his second year, Smith currently works as an outreach and volunteer recruitment member for Florida State Parks District 5, and attributes much of his success in this role to the communication, critical thinking and decision-making skills he acquired through his English degree. “My supervisor is actually having me in more meetings simply because of my skillset,” he said, “so now I’m assisting with how the park markets certain things to the public or how they approach assessing their volunteer workforce.”

The progress Smith has made with the AmeriCorps program is no surprise to Dr. Lillian Craton, associate professor of English and the director of Lander’s Honors College. She knew that his achievements in the classroom would trans-late well in his current role. “Most of our English majors find traditional ‘desk jobs’ after graduation, but Ellison’s choice makes perfect sense,” she said. “He’s a gifted communicator who thrives as part of a team; people are drawn to him.”

Going forward, Smith is looking to find a permanent position with Florida State Parks and pursue graduate school. He continues to express his gratitude to AmeriCorps for giving him such a rewarding experience. “I’ve grown so much from this organization, and aside from getting an extreme change in scenery, they’ve helped me find a purpose, a passion, goals, and an absolutely amazing sense of self,” he said. As for Dr. Craton, she has no doubt that her former student, with his training as an English major, will continue to thrive in this field.

“He has a philosophical streak, a sense of community spirit and social justice, behind his desire to preserve a threatened natural environment,” she said. “Thoreau would approve.”

Harlem Globetrotters “Pushing the Limits” in Greenwood during 2020 world tour

Poll: How do you feel about the “Not My President” protests?