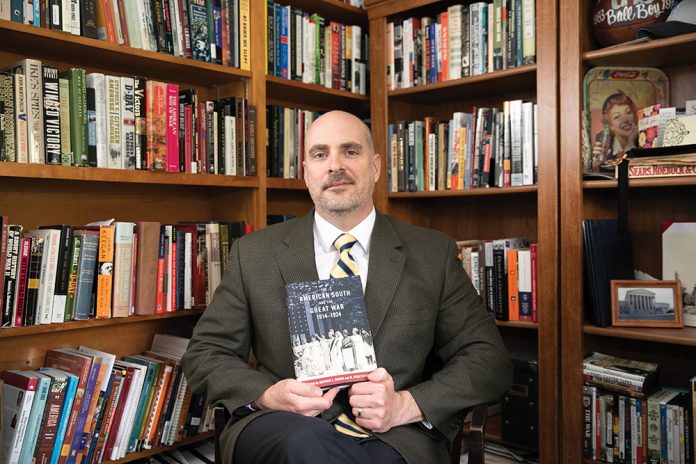 Lander’s recent symposium on the South and World War I was a resounding success, drawing large audiences and attracting scholars from across the country, but it might never have happened without the publication of The American South and the Great War, 1914-1924, by Lander’s Dr. Ryan Floyd, associate professor of history.

It was Floyd’s book, published in November by LSU Press during the 100-year anniversary of the end of the war, that inspired Dr. Lucas McMillan, dean of the College of Behavioral and Social Sciences, to apply for a grant to South Carolina Humanities, which made the symposium possible.

Floyd participated in several of the symposium’s eight panel discussions, as did his co-editor, Dr. Matthew Downs, associate professor of history at the University of Mobile, Alabama. Five of the authors who contributed essays to the book also took part in the two-day symposium, held in March 2019.

Floyd got the idea for his book while researching Abandoning American Neutrality: Woodrow Wilson and the Beginning of the Great War, August 1914-December 1915, published by Palgrave Macmillan in 2013.

“I was surprised to discover that there were no books on the American South in World War I. There were articles here and there, or a chapter here and there,” but no books, he said.

Being a historian, he said, “is like being a detective or an investigative journalist. You discover things, and that’s what makes it exciting.”

Floyd has been in demand on the lecture circuit, too. In November, he spoke on “The First World War and the American South” at the South Carolina Archives and History Foundation’s World War I symposium in Columbia. He was also interviewed on South Carolina Public Radio.

Floyd isn’t the only Lander historian with a new book. Defending the American Way of Life: Sport, Culture, and the Cold War, co-edited by Dr. Kevin Witherspoon, professor of history, was published in November by the University of Arkansas Press. Witherspoon collaborated on the book with Dr. Toby Rider, assistant professor of kinesiology at Cal State-Fullerton.

“Ryan and I actually had a little bet about whose book would arrive in our hands first,” Witherspoon said, referring to his competition with Floyd. “He beat me by like a week.”

Witherspoon, who has served as department chair for four years, said “it’s really cool that our department had two books to come out within a week or two of each other. We went through a very similar process,” he said.

Like Floyd, Witherspoon had a busy fall. In October, he traveled to Colorado Springs, Colo., to attend the 50th reunion of the 1968 U.S. Olympic team, whose exploits he documented in his book, Before the Eyes of the World: Mexico and the 1968 Olympic Games, published in 2008 by Northern Illinois University Press. A highlight of the trip was meeting Olympic athlete Tommie Smith, whom he credited with inspiring his book.

Witherspoon’s experiences at the reunion were part of what he talked about a week later at the University of Dayton, Ohio, where he was invited as the featured speaker for the 31st Annual Doris Drees Distinguished Speaker Series. In addition to addressing an audience of several hundred people, he also lectured in seven different classes. “It was a whirlwind,” he said.

Witherspoon’s teaching schedule for the fall included “1968 – United States and the World,” a global issues course that he developed. “I was so excited to offer that course during the fiftieth anniversary year,” he said.

The speaking engagements continue for Witherspoon, as he is scheduled to give a presentation at the upcoming conference of the North American Society of Sports History in Boise, Idaho, on the historical significance of the reunion he attended.

Dr. Franklin Rausch, pictured, an associate professor of history at Lander, is a sought-after lecturer and recently co-authored a book on Catholicism in Korea.  Photo by Randy Pace

For miles logged on the lecture trail, no one beats Dr. Franklin Rausch, an associate professor of history and Lander’s Asian studies expert. Since last May, he’s spoken at conferences, work-shops and forums in New York City; Seoul, South Korea; Ontario, Canada; and Los Angeles, Calif.

“You know you’re busy when you have to post a day-by-day calendar on your door to alert students whether you’re going to be in Korea or Canada or California, or in your office. You can’t keep up with everything he’s doing,” Witherspoon said.

Rausch has also been busy publishing. He co-authored the book Catholics and Anti-Catholicism in Choson Korea, published by the University of Hawai’i Press in 2017, along with Dr. Don Baker, professor of Korean history and religion at the University of British Columbia. Last year, Rausch collaborated with Dr. Gilliean Lee, Lander professor of computing, on a translation of the Korean folk story, “A Tale of Two Sisters,” published in the scholarly journal Acta Koreana.

“He’s got dozens of 20-30 page academic articles published,” Witherspoon says of Rausch. “It just blows you away.”

According to Witherspoon, Rausch “undersells himself.” He describes him as “incredibly humble.”

“Everybody wants him on this or that committee, or to do this or that project, because he just brings joy to the room, and he seems to delight in whatever administrative task you give him. He can somehow find the happy elements of being a part of these committees that have to do all kinds of detail-oriented work. He’s an amazing guy.”

Dr. William Ramsey, pictured, Lander professor of history, was granted a sabbatical for the spring 2019 semester in order to work on his latest book, The Yamasee Nation in Peace and War.  Photo by Mike Blackwell

“Amazing” is an adjective that could also be applied to Dr. William Ramsey, professor of history, whose most recent book, Dilemmas, published in 2015 by Clemson University Press, is a critically-acclaimed book of poetry.

Ramsey was granted sabbatical leave for the spring 2019 semester to work on his newest book, The Yamasee Nation in Peace and War. The book expands upon ideas that he first explored in The Yamasee War: A Study of Culture, Economy, and Conflict in the Colonial South, published in 2008 by the University of Nebraska Press.

“I’m researching the evolution of the Yamasee political leadership within the nation itself, and their early involvement and the consequences of their involvement in market relations with Europeans,” he said.

The Yamasees, a Lowcountry tribe that occupied territory near the present-day town of Yemassee, were among the South Carolina colonists’ most important allies during the first two decades of the 1700s, supplying the South Carolina plantation system with labor in the form of Indian slaves captured in Florida.

The partnership didn’t last. The competition between England, France and Spain for trade and influence in the region destabilized the relationship between South Carolina and its native American allies, leading, in 1715, to war. “The Yamasees and virtually every other Indian nation in the South rose up to attack South Carolina and nearly destroyed the colony,” he said.

Ramsey said that his new book will discuss how the Yamasees’ activities as slave raiders transformed their society, and how the Yamasee War reshaped the region.

“The sabbatical has allowed me to visit some archives, most importantly the British Archives in the British Colonial Records Office in London, and make more progress than I’ve been able to make over the last few years,” he said.

The department’s medievalist, Dr. Robert Figueira, is a good example. Witherspoon describes him as “an incredible teacher in the classroom. His attentiveness to the students, I think, is where he really separates himself. He’s our faculty leader for the Phi Alpha Theta Honor Society. He does so many things when it comes to student activities.”

In addition to authoring numerous book chapters, articles and supplements, Figueira edited Plenitude of Power: The Doctrines and Exercise of Authority in the Middle Ages. Essays in Memory of Robert Louis Benson (Aldershot, U.K.: Ashgate, 2006).

Figueira is Lander’s longest-serving professor of history, and his “institutional memory” comes in handy.

“To have a Robert in your department is vital, because he knows where we’ve been, and what we’ve tried and what  we haven’t, and how things have worked or not,” Witherspoon said.

In Floyd’s view, things have worked well. He believes that most former students would say “they had a good experience here.”

Rausch was asked what, in his opinion, the department does well.

“I think we manage to offer our students a lot of choices in terms of both chronology (teaching ancient to contemporary history) and area (covering much of the world), while still being able to present courses that go into a lot of detail. In addition, we are able to work with our students on an individual level,” he said.

McMillan credited such individual attention with helping students land internships near campus, such as at the Ninety Six National Historic Site, and farther away, including the Smithsonian Museum, the Kennedy Center and the National Archives in Washington, D.C.

Ramsey believes that Lander’s history program compares favorably with others. “We have some of the best teachers and scholars in the country, and there is no weak link,” he said.

“That’s one of the things that I always say when we have open houses or recruitment events,” said Witherspoon. “I’ll bring in a stack of the books and articles we’ve published, and put our work up on the screen, and tell the parents and the kids, ‘I’ll stack our faculty up against any department, anywhere.’”

He believes that Lander’s history faculty are “doing great things. I’m immensely proud of this group, and to be representing them is a privilege for me.” 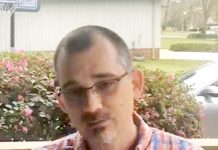