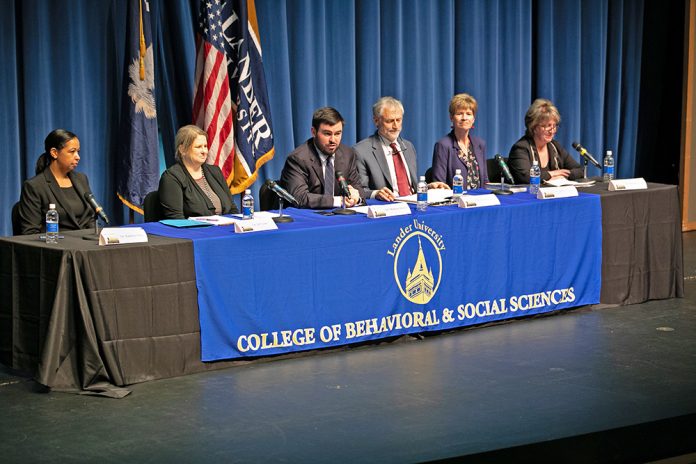 Lander University concluded its two-day symposium on the impacts of World War I on the South with a Friday, March 15, “overview from the experts,” highlighting the economic, social and political transformations that began during the war and continued after its conclusion.

The symposium, made possible by a grant from South Carolina Humanities, featured eight panel discussions in all, on topics such as the war’s impact on women and patriotism; the U.S. military and foreign policy; southern agriculture and economy; and race relations in the South. Other discussions featured community leaders who discussed their efforts to erect a new World War I memorial; and undergraduate students from Lander and Presbyterian College, who shared papers they wrote on topics pertaining to the war.

Lander Associate Professor of History Dr. Ryan Floyd’s new book, “The American South and the Great War, 1914-1924,” published by LSU Press, was instrumental in the obtainment of the grant. Floyd participated in several of the discussions, as did his co-editor, Dr. Matthew Downs, associate professor of history at the University of Mobile, Alabama.

One of the effects of the South’s participation in World War I was expanded rights for women and African-Americans, the panelists agreed, although change did not necessarily happen overnight.

Participation in the war provided a boost to the southern economy, which had formerly been almost entirely dependent on growing cotton and manufacturing textiles, but the economic sector took a hit when government contracts expired after the war.

Another notable result of participation in the war was the growth of consumerism in the South. Cooley said that more of the food eaten by southerners began to be produced in other parts of the country, as they became more active participants in the nation’s “industrial food network.”

Prior to the war, much of the South had not observed national holidays, like the Fourth of July, since the end of the Civil War. Hamer said that participation in World War I led to the South’s being reintegrated into the nation “in a small way.”

Project Director Dr. Lucas McMillan, dean of Lander’s College of Behavioral and Social Sciences, thanked audience members for their interest, the panelists for their expertise, and South Carolina Humanities for its support.

“Lander is always pleased to be a hub of academic learning and inquiry, and the subject of the years of World War I and its aftermath and how those years impacted the South is a fascinating subject,” he said.

What Does The Honors College Offer Students?