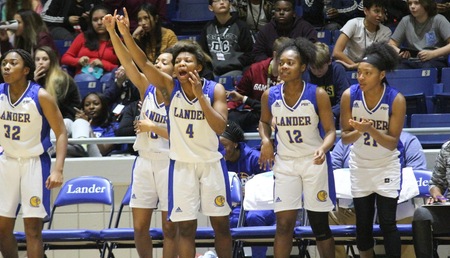 The Lander women’s basketball team had a phenomenal shooting first half Saturday afternoon and broke the Peach Belt Conference record for points in a conference game, defeating Columbus State 117-82 in the PBC opener at Finis Horne Arena.

In a battle of perennial Peach Belt championship contenders, the Bearcats (4-2, 1-0 PBC) won their third straight over the Cougars (3-1, 0-1 PBC). Columbus State had beaten third-ranked Carson-Newman earlier this season.

Lander made 21 of its first 28 shots from the floor including nine of 10 from three-point range and 20 of its first 22 free throws through three minutes left in the second quarter. The Bearcats led 71-37 at halftime and were never threatened in the second half.

The all-time record for points in a game by a Peach Belt team was set on Nov. 25, 2014, when the Bearcats scored 132 points versus non-conference foe Allen University.

Symone Starks led the Bearcats with 25 points, making seven of 10 shots from the floor including four of five from behind the arc.

The Bearcats came out firing in the opening quarter, making nine of 13 shots from the floor (69 percent), including three of four from three-point range, and 14 of 15 free throws (93 percent). Lander missed only two of its first 11 shots.

Leading 14-11, McKenith started a 17-0 Bearcats run with nine unanswered points, making a three-pointer, layup, and four of four free throws. Michelle Wright added a three-pointer and two free throws as the 17-0 run built the lead to 31-11. Lander was up 35-16 at the end of the first quarter.

The phenomenal shooting continued into the second period as the Bearcats reached the 90 percent mark from behind the arc. Starks hit two threes, and Harris, Sanders and Quin’De’Ja Hamilton one apiece to make the team nine of 10.

Starks had 15 points while McKenith and Harris had 14 apiece in the first half.

The Bearcats hit the 90-point mark with two minutes left in the third quarter when Starks nailed a free throw, making it 90-53. It was 97-59 going into the final period.

Lander hit the century mark with 9:14 left in the fourth quarter when McKenith made a three, upping the lead to 100-59.

Columbus State struggled from long range, making only four of 29 (14 percent) from behind the arc.

Livingstone pulls away from Bearcats at Horne Classic