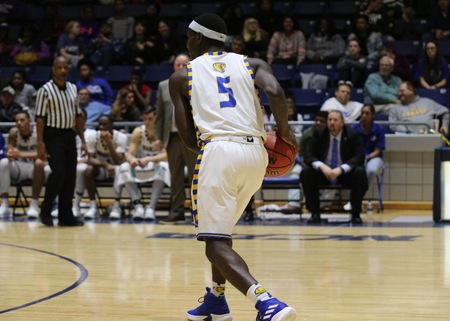 Men’s basketball fall to Erskine, 79-76, despite double-double from Wiggins

The Lander men’s basketball team held an 11-point lead in the second half against Erskine on Wednesday night, but the Flying Fleet rallied to take its first lead of the second half with 1:02 left and held off the Bearcats for a 79-76 comeback win at Horne Arena.

The Bearcats fell to 1-5 on the season. The Flying Fleet improved to 2-2.

Lander still holds a 48-34 all-time series lead in the rivalry.

Marquel Wiggins paced the Bearcats with a double-double, scoring 16 points and pulling down 10 rebounds while also blocking two shots.

Jaywaun Washington paced Erskine with a double-double, scoring 22 points on nine of 14 shooting from the floor while adding 10 boards.

There were five ties and 10 lead changes in the first 12 minutes of the game. Jamarius Hairston’s 3-pointer from the left corner gave the Bearcats a lead that they would not relinquish again in the first half, making it 24-21 with 7:44 to go.

Lander’s largest lead of the first half came with 3:33 left when Wiggins hit a layup off a long pass from Justin Holliday to make it 32-25.

Erskine’s Brevard drove the length of the floor, laid it in and converted a three-point play with 3.7 seconds left to pull the visitors within 34-31 at halftime.

Brevard opened the scoring in the second half with a 3, tying the game at 34. But Alston’s put-back gave the Bearcats the lead at 36-34.

Jordan Dingle’s 3 from the left corner gave the Bearcats their first double-digit lead, 59-49, at the 12-minute mark.

Purdie’s 3 in front of the Bearcats bench put Lander back on top at 76-73 with 2:37 to go. Wiggins made an apparent acrobat put-back inside the two-minute mark that would have extended the Bearcat lead but was called for traveling.

After Washington scored to cut Erskine’s deficit to one, the visitors took their first lead of the second half, 77-76 with 1:02 left, when Smoot made a pair of free throws.

Venable made a hook shot with 26 seconds left to extend the Fleet’s lead to 79-76 and then blocked Purdie’s game-tying 3 attempt in the final seconds to clinch the victory.

Cross country takes on the field at the Bulldog Stampede on...

Men’s Soccer: Bearcats back on top