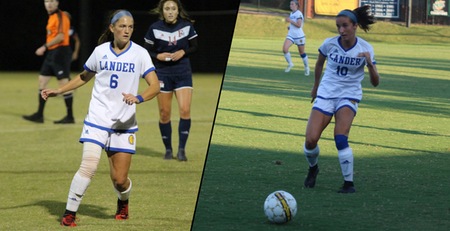 Taylor, a second-team All-Peach Belt Conference selection, scored nine goals and registered six assists on the season. The Delran, N.J., native started 16 matches for the Bearcats, ranked second on the team in goals, assists and points, and led the Bearcats with four game-winning goals.

Jermstad was a second-team All-PBC performer who ranked second in the conference in assists and shots. The Irmo, S.C., native started all 17 mathes, led the team with 10 assists, and scored seven goals on the year. The Bearcats were 11-0 in matches when Jermstad recorded either a goal or an assist.

Lander finished the season with a 12-2-3 overall record, finished second in the PBC and made its first trip ever to the NCAA Tournament, earning the No. 3 seed in the Southeast Regional.

No. 22 Lander races past rival Erskine after big second half