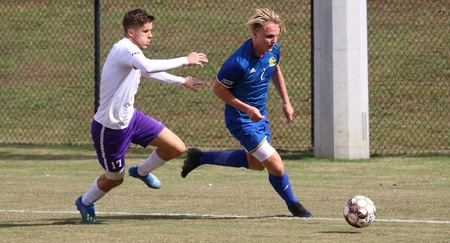 No. 7 Lander falls in penalty kicks at PBC Tournament championship:

The seventh-ranked and second-seeded Lander men’s soccer team came up just short in its bid for its second consecutive Peach Belt Conference Tournament championship as the Bearcats fell to second-ranked and top-seeded Young Harris, 9-8, in a penalty kick shootout.

Lander (14-1-3) will find out its postseason fate on Monday night during the airing of the NCAA Division II Men’s Soccer Tournament Selection Show at 6:00 p.m. The Bearcats entered the day as the No. 2 team in the Southeast Region, behind Young Harris (16-0-1).

Both teams converted their first four penalty kicks before Lander’s fifth shot sailed over the crossbar. The Mountain Lions’ Macauley King had his shot hit the bottom of the crossbar and fall into the net to give Young Harris the championship.

Lander set a program record in the win as the Bearcats extended their streak of holding opponents scoreless to 709:12, breaking the record set by the 2013 team. Young Harris held a 14-11 advantage in shots on the day, as Jacob Withers made five saves. The Mountain Lions played the final 20:55 of the match a man down after Seba Andreassen drew a red card in the 90th minute.

The Bearcats are hoping to host their first home NCAA Tournament match since 2013, when Lander defeated Flagler, 1-0.